Every year around this time we get an onslaught of X-mas cards in our mailbox, and realize that it’d be impolite not to return fire. Artists duck as I search for a volunteer and lead artists come tell me exactly how their schedule will be affected if I dare draft someone for  X-mas card duty,  yet each year I manage to find a new victim. This year, surprisingly, it was a Larian veteran who managed to get the job – you would think he’d know all the evasive maneuvers by now – but somehow he got cornered and was offered two options – do it or do it. Being a veteran, he did it quite fast however, and so well that I think he’ll be allowed a second term next year 😉 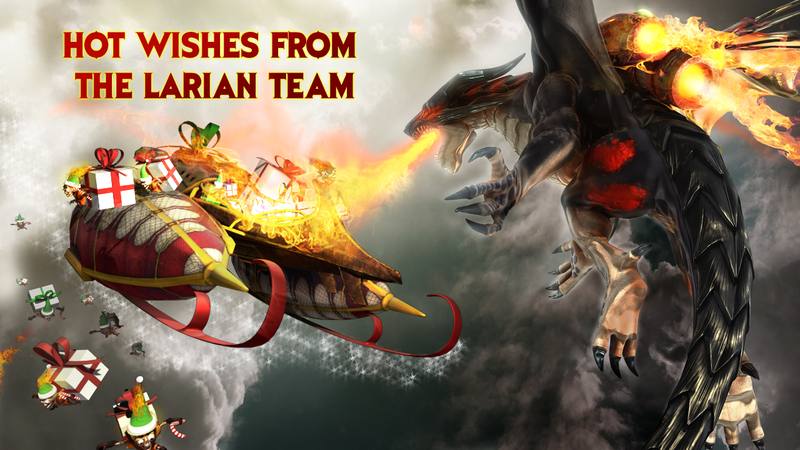 This is going to be my last post for the year as I’m off for a holiday together with my family, but before going, here’s a bit of musings about how 2011 treated my studio & me.

In short, pretty well. We managed to assemble sufficient funding, not only for one game, but two games, and not just any two games, but two games we actually feel good about making without anybody telling us how to do it. It’s a luxury position, and the devs locked up in slavery camps are right to feel envious, but I guess we earned some good fortune because we took quite a lot of risks to get in this position, and for the same amount of money with a bit of bad luck, we might actually not exist anymore.

We released 5 Monkey Tales games, won an award which we’d never heard about a couple of years ago but which we were nonetheless very proud of, and received lots of fan mail from happy parents, including some very touching stories. We also didn’t receive any death threats (at least so far), but that’s probably to do with not releasing an RPG this year.

We actually also completed our first Iphone game, but didn’t release it yet, probably because we’re a bit unsure about it and don’t understand a thing about how you can make money on that market. It’s going to be one of the things to do next year.

Which seamlessly brings me to next year. Here’s the highlights I hope I’ll be talking about at the end of next year:

With a bit of luck we’ll have had a good release for Dragon Commander and there’ll actually be a market for our crazy genre-buster, the latter being a term I picked up from the press because I had no clue you called a game like that a genre-buster. I love that game and I cross my fingers that I’m not going to be the only one 🙂

Project E will have been announced, and I expect there’ll be some interesting reactions (read hateful flaming mixed with some hopefully ardent support) for what we’re doing with that one, but I learnt a long time ago that you can’t please everybody.

Monkey Tales will continue its ascent to glory and we’ll see it entering more and more countries.  We’ll also have the first results of the university research that’s being done about the effectiveness of methods like Monkey Tales in schools, and I’m very curious about that. Instinctively all involved feel that it works, but it’ll be good to see it backed up by some solid numbers.

The bloody Iphone game will also get released, together with a second one I promised someone we’d make. Who knows, maybe it’ll even enjoy some success. In the same breadth, we’ll even have released a facebook game, another one of those crazy ventures I never thought we’d embark upon.

I also hope I’ll be able to look back upon 2012 as the year Larian really figured out how to self-publish its games. We’ll start our campaigns for real next month, and I’ll be eager to see if the shitload of money we’re planning on spending on promoting Dragon Commander and Eyes…project E was worth it, or if we just made the biggest mistake in our history.

On a personal level, my family is getting an expansion pack and I’ll become a father again next year, something I didn’t expect but look very much forward to. That’s probably because I forgot all the sleepless nights the little brother and sisters caused, but I guess we’ll survive. It’ll be an interesting experience for sure, to match ànd a new baby ànd a exhausted wife ànd several cross-platform releases all at the same time.

And with that, I wish the 3500 of you a happy new year, all that you can wish for, some spare cash to  buy our games, better politicians, a cure of everything , and a healthy dose of optimism !!!