I’m ambivalent about the entire crusade against pirates thing. Every now and then it’s  it’s an issue that gets claimed by some publisher because of some new technology that gives them the illusion they’ll finally be able to stop it. Eventually it  boomerangs in their face, and they go hush about this issue. If they care, some poor community manager is then appointed to deal with the consumer backlash, and some other publisher pops on the scene, declaring the war on pirates, and the cycle starts all over. 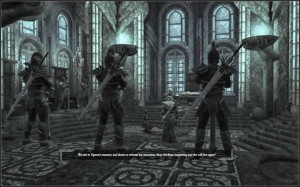 These guys will find you if you copied a Divinity game !!!

And now we have CD Projekt  – first they make a lot of noise about the fact that their games are DRM  free and that publishers that enforce DRM are idiots ( DRM stands for Digital Rights Management, a fancy word for anti-piracy measures) Now the same CD Projekt makes it back into the press because they hired one of those one-stop-shop lawfirms that promise to use the full force of the law to hunt down  those that make illegal copies of their games, imposing a fine which from what I heard is approximately 40 times the revenue they’d get from an ordinary sale.

As an executive having to pay my employees every month, I understand the reasoning behind wanting to maximize revenue as it costs a lot to make these games. I also understand the business logic – if only 10% of those addressed by those lawyers pay out of fear for the court, the revenue multiplication factor of 40 makes it worthwhile. And it communicates the message to the public that is susceptible to these kinds of threats that pirating their products can bring them in trouble.

But that doesn’t mean I’m pro-DRM. You see, I wouldn’t be in this industry if it wouldn’t be for the abundance of copied games I played when I was a teenager. I built up most of my gameplay instincts playing those games, and being a slow learner, it took a lot of games, some of them being very bad.

I probably played a couple of thousands of games illegally, and so I’d be quite a hypocrite if I’d condemn something I’ve been doing myself for years. I now make enough money to buy all my games, but I didn’t back then. To be frank, I actually didn’t think about the developers and how they were affected by my piracy actions. I even cracked/fixed bad cracks when I discovered that my gameplay experience was being disturbed by some fancy copy protection. (edit: Obviously I know better now, and those were the days when copying music from radio to tape was a well-practiced art across all ages.)

The classic arguments pro-DRM are that it helps stop day 1 copying and prevents those not in the know from duplicating a game. DRM  prevents shady distributors from making their own versions of a game, and if there’s an online component,  helps track sales. According to the proponents, these are benefits that outweigh the discomfort caused for legitimate customers.

I don’t agree with that reasoning.

First of all, the discomfort argument is a very real argument which I experienced several times. Not so long  ago I threw a well known game I had just bought through the window, because the online activation didn’t work. It ruined my sunday and I swore  I’d never buy a game from these idiots again.

But secondly, I think the entire DRM argument is part of a dying model, at least in its current form. Traditionally we expect people to pay for the entire experience present in the box, even if the game doesn’t turn out to be as expected. Even a demo can be misleading, a lot of them are even made to be misleading. I have an entire collection of games that I bought but only spent a couple of hours with. If you have limited disposable income (as I did when I pirated), at the price games go, paying full price for only a couple of hours of entertainment is quite expensive. It’s also unfair, especially if 90% of the game doesn’t match what’s on the back of the box. Of those thousands of pirated games I played, there were only a few that I played through, with most of the games in my collection only receiving 5 minutes of my attention.

I did pay for the few games that I played over and over (some of them I even bought multiple times because I lost the activation codes ). But in some cases, I paid for crap, and then I felt cheated, because when I bought it, the box told me the game wasn’t crap.

The latter is argument most frequently used by pirates – we’ll buy the game if it’s good. Having been there, I actually follow that reasoning, even if I did sin against that rule from time to time.

That’s why I’m a believer in the pay as you go model. If I play for one hour, I’m happy to pay a reasonable price, reasonable being defined as being something in line with what is common for one hour of entertainment offered.

And if it’s a very good game, I’m willing to pay more than what I’d pay per hour for a mediocre game.

Such a model would’ve suited me well when I was discovering the world of games as a  teenager, a discovery that involved biking to the one place near my birthplace where you could get anything you wanted provided you brought enough floppy discs. It’s worth pointing out it was impossible to find a shop that sold games where I lived, it being a corner of Belgium.

In such a model, I’d expect the first hour or so to be free, and the rest payable. You’d get a lot less junk, the guys who make top games would get the most rewards and players wouldn’t be cheated.

The price should be capped  to a reasonable maximum that reflects the investment made to create the game. It’d be the type of DRM that would works and it’d probably also make the market at lot larger.

That’s why I’m a fan of the streaming model, even if there still are plenty of technical and business logic issues to be solved in this area. If these issues get solved, pirates who claim that they buy a game if it’s good don’t have an argument anymore: everybody can try out the game immediately, for free, and if if you like, you pay as you go, until a certain limit.

I also like the evolutionary pressure this puts on developers to make good games. Marketing can’t compensate for a bad game anymore, because people will quit playing rapidly if the game isn’t any good.

And good developers won’t have to go legal to earn some extra revenue by threatening their fan-base with fines.

So as far as I’m concerned, providers of cloud gaming are the future, both for players and developers, and it’s a future that can’t come fast enough. I just hope the cloud service providers that become dominant will offer fair deals, and not regress into using some of the practices their precursors employ.

Edit: Wow, I’ve seen some acid reactions to this post on some forums, so let me put some oil on the fire:

On me copying games: I copied games when I was a teenager and was ignorant of how that affected developers, I’m not ignorant about it now, so I’ve evolved. What’s right and what’s wrong is context sensitive and changes with time. When I was a kid, copying wasn’t considered a real wrong. Yes, I know I’ll still burn in hell, but that was already a done deal anyway.

About price sensitivity:  The average price for 1 game was 5% of an average salary over here.  Bundle deals on Steam nowadays allow you to get plenty of games for prices lower than what a pack of floppies cost at that time. I’ll write more about the consequences of that particular (bad) trend another time.

About comparing copying to stealing a car: If you buy a car, you get a chance to test drive it to see if it suits you. You also get something like a warranty if something’s broken. I’m not going to bother to state the rest of the argument here as I assume it’s obvious.

On cloud gaming as a future: It’s going to happen, eventually. One of the consequences will be that  piracy will be better contained. I also believe cloud services can be a boon to consumers if not abused. It’s not going to happen overnight, there’s too many problems still, but personally, I’ll also be quite happy the day we get rid of this antique concept of games being consumer hardware dependent. But I also don’t want to end up in the hands of one or two monopolistic portals.

Further on cloud gaming: The argument that developers will only make the first part of the game good and not the rest isn’t valid. Players will stop playing the moment the game isn’t fun anymore, preventing the developer from getting any extra revenue, and if they paid for the parts they had fun with, I consider that fair.

On piracy in general and the game’s industry hate of it: Greed on both sides has a lot to do with the issue.

On Larian having DRM on its products – not by our own choice, we got rid of it as fast as we could and released DRM free patches for all games we could.