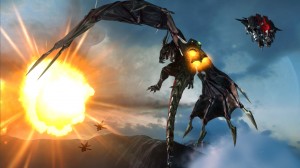 One of the problems we’ve been struggling with is how to communicate what Dragon Commander is all about, given that it’s a genre-buster blending RPG, strategy and action gameplay. And suddenly, out of the blue, somebody sends me a mail that captures the feeling we’re trying to create. It was so spot on that I wanted to share it with you:

“I’m seeing a trailer of Dragon Commander that has camera zooming in on the council, with the general stamping his feet and pointing at the invasion target – then moving past to the bedroom, here’s the dragon knight kissing his wife and donning his armor – and then to the deck, with the fleet taking off – and then into the battle, into the glorious battle, where there’s almost a loss, a retreat, a re-groupment with a top-down view, – followed by victory, followed by negotiation with captured prisoners, – followed by the council again, clapping and drinking, and in the background – a wife calling to the bedroom, and a scientist eager to show new blueprints. This is what would make me buy the game.”
Tweet