I saw some interesting reactions to Why so many developers close their doors, here and on other sites. A fun consequence was that some guys from the Larian team approached me  voicing their concern that if I’ll actually post all the stuff I think on this topic, we’ll never manage to do any business in this industry again.

Figuring this was the perfect opportunity for me to take on my papa smurf look, I tried to calm their fears by lecturing them about our grand going independent strategy, and how it’s rooted in years of experience of talking to the “big publishers”. Read on If you want to figure out how I came to became a rebel, with plenty of reasons to shun the official prostration that goes on twice a year at events like Game Connection. 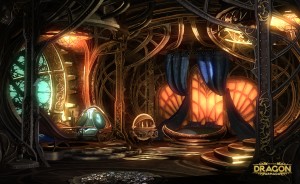 An image I used when trying to pitch the idea of a Steampunk dragon game - are you bananas was one of the friendlier reactions I got. Yes, it was called Dragon Armada back then 🙂

For most publishers the business model is tweaked to make large profits on hit titles, with sufficient margin to cover all of their costs and the losses caused by flopped titles. The strategy they use to find hit-titles is that a gate-keeper, typically somebody with the role  “business development director” on his card, searches the world and his inbox for new hot game pitches.

Preferably these pitches are for games that are already well under way, have a solid team behind them with a good track record and sufficient finances. The game’s topic should also fit whatever marketing fancies is a good idea.

If the bizdev guy can check all those boxes to a sufficient degree, he presents whatever material is available to a green-light committee, people who are rumored to have incredible insights in what we want to play. Normally you find people from sales & marketing in such committees as well as some guys that actually play games like a producer or somebody from quality assurance.

Looking at Larian I always thought we were ok on the checkboxes – my team is solid, we’re in the business for 15 years with several games having a metacritic above 80% and we’re self-sufficient. Our games also have the habbit of selling for a long time.The only thing that could stop us from making it to the walhalla of the green-light committee  therefore would be that committee members just don’t like our games (or me/my studio).

We actually did make it to several green-light committees of top 10 publishers, I even sat in on a few of them to present my games,  but we never managed to sign with any of them, so obviously something went wrong. Other than occasionally having to deal with idiots, the biggest common hurdle I found has always been the marketing department. I’ve learnt that in general these people don’t like RPGs. They just don’t get it.

In general marketeers want a simple USP (unique selling proposition) that differentiates your game from the competition. That’s not rocket science, but it’s  obviously something that’s very hard to define in a game where it’s all about the whole being larger than the sum of the individual features. That a lot of these individual smaller features are different doesn’t matter to them, they want something big, preferably something not done before. They also want stunning visuals & animation, which is again very hard, if only for the freedom and wealth of options you need to offer players in a RPG. One of the consequences of that is that is that you can’t use a whole bunch of the tricks available to FPS developers, and obviously the RPG suffers in visual comparison.

The reason marketeers want a strong USP and plenty of visual polish is obviously that they think that that’s what’s required to make good sales, and unfortunately (or actually fortunately) their imaginations weren’t triggered by the visions I tried to communicate to them.

I’ve tried everything I could think of that by telling them that in a good RPG it’s the detail and the heart that’s put in that counts, and that if they were to sign on, we’d have the budget to put the polish in there that they were looking for, but to no avail. I tried the sales angle, showing them figures for Bioware & Bethesda RPGs, arguing that with our unique take on the genre and the same budgets we could give them stellar sales, but it just didn’t work.

I’m pretty sure I convinced at least some guys around those tables, the guys that got me in those meeting rooms in the first place, but my language, style of communication or just the assets I brought weren’t strong enough to convince marketing. And at most publishers, if you can’t convince marketing, you don’t have a deal.

So after having sat through several of those defining first-impression moments where I saw the marketing guys pick up their blackberries after seeing a couple of minutes of footage of the games we were working on, I came to the conclusion that if the game wouldn’t look and move like a first person shooter at the same stage of development, and didn’t feature a big hook that could be communicated in one phrase, it would never work. The only thing that would work would be if I showed a powerpoint where I say – dude, the previous game sold 3 million units – so even if you don’t get it, there’s a market.

Somewhere in between one of those meetings I made the decision that the only way we could break through would be by doing it ourselves, without the involvement of a large publisher. Given an environment in which record sales require massive polish which in turn requires massive investments, I needed to find a way to get access to that investment, without the shortcut of getting it from a publisher.

So I asked myself, why do you need these people anyway ? Seriously ?

The roles of a publisher are typically banking, pr/marketing and sales/distribution. They usually also offer localization & quality assurance services. On one occasion, I asked an executive producer that had worked on some top titles how many people it would actually take if I wanted to take care of those roles myself,  and his surprising answer was, not that many, if you can manage the funding. Which got me thinking.

My personal experiences with mid-sized publishers had shown me that all the pr/marketing tasks on a game were usually done by only a few people who then hired a whole bunch of services from dedicated firms. The same went for localization and quality assurance. If you have the funding, it was clear that you don’t need to care about the banking, which publishers are anyway bad at, so that left sales and distribution.

Crack that, I told myself, and you don’t need them.

Followed some very interesting times in which I managed to guide the studio to actually make money from its games. The games were inherently not the way I wanted them to be because I lacked the budget, and the money collected wasn’t as much as it could’ve been since I still went through publishers , but it was good enough to set us up for the next stage of the plan.

That stage is the self-publishing adventure we now find ourselves in.  We recently started staffing up our in-house publishing team to the extent that we’ll be able to offer more publishing attention to our games than they would actually get at most publishers, and we’re now happily making our games without anybody interfering.

All I need to do now is get the games in the stores, because even if digital sales make up for a lot of revenue, retail still matters very much. And that’s the one thing we can’t do ourselves. We can make the boxes, we can ship them, but we don’t have the sales network required to put it in the stores.

That means I still need to go through publishers, which is what concerns my team 🙂

I’m way over my self-imposed word-count limit here, so I’ll leave the “getting it to retail” thoughts for another time, but the final point I wanted to make is that the above story is not unique to Larian, a lot of developers that can are going the same route, and eventually it’s going to be the thing that will shake up the games industry as we know it significantly.

There’s a lot talk about the indie thing, but typically that’s about smaller garage teams looking for the big break. Larian is a larger established team, with all the stuff that comes with that, but we’re making a move that if copied by other similar-sized developers, will shake up the publishing world by its roots.

The creativity of independent teams together with access to the revenue their games generate, and the ability to bring their own games to market, will forcefully put publishers in a position where they need to question their reasons for being.

But obviously, we first need to learn how to publish our games, which isn’t that simple either 😉