Reading this blog, you might get the impression that the only thing I deal with is the financial side of development. Yet, when you look at the credits of Larian Studios games, you’ll discover that I used to be both lead designer and programmer of games like Divine Divinity. 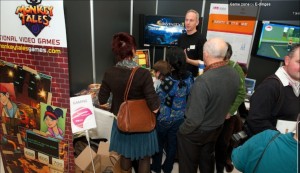 Me selling some of my games - every little bit helps

What happened was that in the early 2000’s, I could get away with me being in charge of most things. But as productions scaled up and teams became larger, I was forced to (very reluctantly) release several of my roles as I was doing more damage than good. My main job became that of being the one outlining the general vision, and overcoming any obstacles encountered during executing that vision.

Since it turned out that financing topped the obstacle list, I ended up focussing a lot of time on the cash aspect of the business.  But to be honest, I hate this part of the job,  it’s not the reason I founded this studio. There really are days when I say, the hell with it, I want to program again, I’m not dealing with this stuff any longer (today is one of those days 🙂 )

But then I remember the ultimate goal, the making of “the very big RPG that will dwarf them all”, and I get on with it, realizing that the side-quest of finding of what Hollywood calls “Fuck-you money” is realy becoming urgent.

The problem is, every time I think we’re close to achieving that point, costs go up, and we need to find more cash, which doesn’t really help.

So, a plan was formed…

for a total of 6,5M€. That’s a lot of money and as the Dragon Knight Saga was released via co-publishing deals , it also meant that we needed to take care of the majority of this investment ourselves, since the publishers only contributed partially to the funding.

Our modus operandi was to make cash with kids games like for instance Monkey Tales or Adventure Rock, and then spend it on the RPG. This approach obviously worked since we managed to release the game, but in hindsight, I’m sure we could’ve done it for a lot less and with a lot less frustration.

Knowing what I know now, I think we could’ve brought down costs by 2M€, and had this game been made in another country (Belgium has notoriously high labor taxes), we could perhaps have made all of The Dragon Knight Saga for less than 4M€.

So part one of the plan is to try to use our financial resources in a more clever way, applying lessons learnt, allowing us to put more stuff in our future games.

Part two is that instead of spending a lot of effort on non-core games to earn money, we focus on making more core-games.

The reasoning there is quite simple – we noticed that good sales on The Dragon Knight Saga are correlated to good sales of the other Divinities, with people in general enjoying the games. More good Divinity games should therefore make the entire series stronger, and an added advantage is that we are working on making more RPG technology, rather than non-RPG tech, which will help bring down costs in the future, and further accelerate our development cycle.

That’s why in addition to Dragon Commander, we’re also working on an unannounced RPG (which btw is closer on the release horizon than most people think J )

Part three is to earn more revenue per game sold. That’s why we’re going the self-publishing route, cutting out the middle-men, as outlined in a previous blog post. Here too there are extra advantages, because not only do we make more money to fuel our future ambitions, but we also have more control of how our game is released, something we’ve had quite a lot of issues with in the past.

Now if you read of all that, have you noticed what I’ve become ?

I’m a guy that started a game development company because he was inspired by Ultima VII to make huge RPGs, with a vision of a free systemic game-world coupled to a strong storyline and powerful character development mechanics. But all I talked about here was more cost-efficiency, more company focus and higher margins.

Still, I don’t think there’s any other route. To be able  to fulfill the ambition of the “very big RPG that will dwarf them all”, we need to cash-rich enough to disappear from the planet for a couple of years, and focus on doing only that. We need to enter that development with plenty of RPG experience and technology, and we need to know that upon release, we’ll be able to recoup our investment so we don’t go down immediately afterwards because some publisher tells us “so long and thank you for all the fish”.

So we’ll try to make two very good games that will be released in 2012-2013, do this as cost-effective as possible, ensure that what we build will help us in the future, and fight to maximize our revenue from these games, so that perhaps in 2015 you might see the game this company was created for.

At least, that’s the plan. Between that goal ofcourse and where we are today, there’s a huge obstacle course, which brings me back to my current job-definition a.k.a. acting as either a bulldozer or a kangoroo.