Whenever I manage to get home before my kids go to bed, I am forced to tell them the next adventure of Little Green Dragon. Little Green Dragon you see is the sequel to Little Blue Dragon. He’s been having an epic journey through an enormous fantasy world for over two years now, fighting against the evil Nomen who just recently abducted Little Green Dragon’s mother. 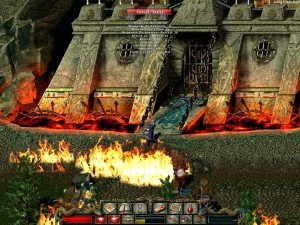 It’s becoming pretty hard for me to keep up with my own story, and unfortunately my kids have excellent memories, so occassionaly I need to carefully query them about some of the well-known facts of the little dragon universe. I even started taking notes.

The thing they like the most I think is that it’s a neverending story. Whenever I try to bring some closure, they want to know what happens next . Running out of inspiration and hoplessly caught in a spiderweb of plotlines, I tried finishing the story once, but a young boy crying and a wife giving me the evil eye, forced me to add yet another plot-twist, meaning that Little Green Dragon still has a very long journey ahead of him.

My personal equivalent of listening to Little Green Dragon stories is playing RPGs & reading books, so I guess the apple didn’t fall far from the tree. I too like my RPGs to be very big, and I rarely read a fantasy book if it’s not at least a trilogy. If it’s not big enough, then I don’t feel it’s worthwhile investing myself in the protagonist, because what I’m looking for are grand epic adventures, Lord of the Rings like.

So recently the discussion of size versus quality popped up again at Larian Studios,the topic being where to spend our efforts, and as typical in that conversation, I once again found myself stuck between a rock and a hard place.

The gist of the argument is very simple – given a fixed budget, the smaller the world in which the RPG takes place, the higher the quality and polish of that world. The corrolary of that is, the larger the gameworld, the more generic the mechanics that drive it.

We started working on something called Project E in 2010 at the same time as Dragon Commander. While Dragon Commander breaks new grounds for us, project E is very much what people expect from us, a big RPG with all the stuff that goes with it.

At some point during development I asked the guys in the team to put the concept art for the entire world on a wall, and chalk out the pieces that belonged together. Given that the brief was that I wanted it to be a grand adventure with continous changes in environment, I wasn’t surprised that what I was looking at was very varied, and also very large. Definitely Little Green Dragon worthy and of a scope I would invest myself in as a player.

But then the next thing I did was asking one of the designers to estimate how long it was going to take to traverse one zone of the world. On the face of it, he thought it was going to take half an hour, but obviously it might take a bit longer. So we sat down with a chronometer and role played a walkthrough of  a zone. Turned out that the half hour became at least one hour, without any way of really knowing because we didn’t factor in interface operations such as deciding which skills to get, what items to trade etc… things we couldn’t try because the game’s still in development.

Enthousiastically the designer told me – yeah cool, it’s going to be really epic, really really epic. Sadly this was quickly followed by him being disappointed because I told him –we should cut. This didn’t go down well and he argued quite strongly and well against it, but in my mind the decision was already taken – every single alarm bell ringing very loud inside of me. Looking at that very long and high wall,   I knew that without intervention this game was going to be way over budget and really late.

So I told him, cut about one third, rewrite the story in such a way that we can still add the one third (for  the unlikely event that we’ll be ready with it ahead of time) and then we’ll see.

I broke his heart, and I also broke mine, because the small boy in me actually wanted the world to even be larger. But the big boy said, you can’t do this. Probably one third isn’t even enough, you might have to cut half.

Sean R. in a comment on “The route to the very big RPG that will dwarf them all” wrote that one should prefer quality and uniqueness over quantity. He hit a note that doesn’t really feel right to me, given that I’m the one who likes both quality & uniqueness but also quantity when it comes to a RPG. However, there’s some evidence to suggest that he’s more right than I am, and that if forced to choose, you should always reduce the quantity.

Two important supporting arguments for this are experience with reviewers, and actually time spent on RPGs by players.

Having read a lot of RPG reviews, we learnt that a lot of meta-critic reviewers in general only play a game for a couple of hours or so before making their final judgment, especially if the game doesn’t have a huge advertising budget. They also rarely reduce the score for a game being too short, which is actually one of the few consistent traits we observed 😉 Since their rating is ultra-important for the sales of a RPG, this is quite an important observation.

You can’t even blame them, because statistics obtained by monitoring how many achievements are unlocked in Divinity II: The Dragon Knight Saga on Xbox360, tell us that 40% of players finished the first part of the game, 18% the second part and a mere 7,5% the entire game. So in this sense, reviewers represent the audience, which in the end I guess is their job.

If we project this in gameplay time, it means that the large majority of our audience is more than served with 20-30 hours, and you can’t help but wonder if it’s worth the effort to put in more than that.

So this time around I decided to see if anecdotal evidence, xbox statistics and what agents, publishers and friendly journalists tell me, really makes sense. The policy of the day has become the ruthless guarding of polish and quality at the expense of quantity, with the silent hope that the team progresses fast enough so we can still appease my inner yearning for the grand-scale adventures of Little Green Dragon.

That, and the knowledge that even if I reduced the scope of project E by 30%, it’s probably still going to be large enough( if not too large) by the reasoning I outlined above. I say that because when we finalized on the scope of Divine Divinity back 2001, I thought we were making a a 20 hours game, and suffered from a mild depression  until I discovered that 20 hours in my book meant around 60 hours when observing players playing  😉