A sequence of things that happened this week made me realize that something that seems over-obvious to me, may in fact not be so obvious to others in the same position. It’s all to do with how independent developers look at retail, or rather, how they don’t look at it. 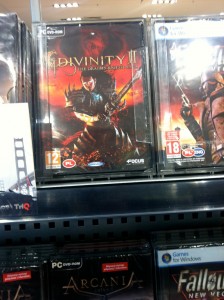 Is it really that stupid to make sure your games can be seen by anybody who enters a shop ?

“Ehhh… this little post from RPS has a lot of comments from people going, “what the hell?” — obviously I would also agree that digital is probably the best way for indies to get big numbers these days, but yeah… might be worth hopping in and commenting a little bit?”

So I go look, expecting the interview to be online but to my surprise it’s a teaser with the header “retail important to indie PC studios”. My initial reaction is something along the lines of – yeah, so what – that’s not particularly interesting – but then I check the comments section, and to my surprise people are actually debating the very point.

Next, in an email discussion with a fellow friendly developer, Sergei, our enigmatic publishing director, proposes hooking up said developer with an excellent local distributor. To our surprise, the developer’s reaction is lukewarm, saying that he prefers his German publisher to deal with all aspects of retail distribution in Europe. When we tell him, but your German publisher doesn’t have any retail presence outside of Germany, he tells us, yeah, but he’ll make a deal with others and then he’ll pay me royalties – it’s a lot of easier for us that way.

We obviously go silent at that – why would he prefer a cut from a cut instead of going direct? It’s not like the German publisher could force him to accept a European deal in return for financing the game – he’s self-funded, and made plenty of money from his previous game.

Then I do an interview with Gamesindustry.biz  and again, the interviewer expresses surprise at the fact that we’re trying to get our game in retail, and we spend quite some time discussing that particular bit.

So I started wondering, am I missing something here?

Larian’s distribution strategy can be summarized as follows, sorted by how we prefer a sale to be made.

It’s true that points 4 & 5 can be interesting from time to time, so we have some key rules in place to avoid future frustration

It’s no rocket science, and I can’t figure out why you wouldn’t want to do retail, even if you prefer direct or digital sales.

The only real reason I can think of is the fear that the margins might be lower. So I did some calculations.

The numbers I’ve seen from my own games but also other games show that 70% of digital sales are made via promotions where reductions between 30% to 75% or even more are offered to players. That clearly impacts the average revenue per unit in digital (though for players it’s great 😉 )

Retail has the same thing, they call it price protection and obviously you also have to deal with returns, but all in all it’s a lot less elastic than digital.

Comparing the two, I ultimately arrived at the conclusion that in today’s market you end up with a net per unit in retail being approximately 70% of net per unit digitally. Or in other words, you need to sell 3 units in retail to get the same money you’d get from 2 units digitally. That’s clearly a difference, but it’s not that significant that you can say, retail isn’t worth it.

Unless, that is, the retail audience is the same as the digital audience.

Now, I don’t have numbers on that, but anecdotic evidence, together with the observation that even Valve still puts a lot of effort in their retail presence, leads me to believe that the overlap is not as great as press headlines would lead you to believe.

Besides there still being many other players out there that don’t like buying something digitally, you also need to factor in that broadband isn’t omnipresent yet, especially in Eastern Europe. And if you’re not in a store, you can’t reach those players. On top of that, being present in stores is also a form of marketing.

So my take is that if you’re not doing points 1 to 5 as an independent developer, you are most definitely losing revenue, revenue you can use to make better games and increase your independence. Of course, the retail margin starts eroding rapidly if your business model for being in retail is one in which you get a cut of a cut (and in some cases, of a cut)

But, given that so many people are questioning my reasoning, please take this post as an open invitation to correct me. If our strategy has a fatal flaw, I’d like to know now rather than later 😉

Never in my career did I expect I was going to be defending retail as a model 😉 And for clarity’s sake, I’m not saying retail is the future, but it’s here now and you should use it for what it is.