I’m going to write a bit about game design and pitch the choice & consequence mechanic in Dragon Commander today. As a heads up, I’ve got another piece coming in which I interviewed a royalty auditor who did audits at all of the top publishers, but it’s going to take my some time to write up the interview. She had interesting things to say however, with some of them requiring me to correct some of my statements on this blog. But as I’m off to Hamburg to meet plenty of German distributors at the Casual Connect thing, it’ll have to wait a bit.

Look, I know you don't believe a word I'm telling you, but really, that's what I'm trying to do - lots of choice and consequence, really, lots of it !

They are two words that’ve become must-haves on the back of the box for any modern RPG that wants to matter. If you look at the advertising done for some of the biggest RPGs of the moment, you can easily be fooled into thinking that here are games  that allow you to do anything you can think of.

The reality of course is quite different. When it comes to crafting stories, branching storylines, coupled to simple systemic gameplay elements, are still the state of the art for RPG developers. Essentially we use the same mechanic the “choose your own adventure” books used, with the nuance that the turning of the page can be accomplished by different means.

Some time ago I asked Octaaf, our lead QA to give me a rapid overview of the state of the art in choice and consequence gameplay, the idea behind my request being that I wanted to compare what we had planned for project E and Dragon Commander to what our competition was doing. Here’s what he told me:

I don’t know how he got the numbers, nor did I check if they’re 100% accurate, but they were sufficient for me to do the comparison I wanted to do and more importantly, it told me the one thing I really needed to know – nihil novi sub sole, nothing newer under the sun.

The numbers of quests for these three games are low enough that you can immediately see that it’s impossible for them to have real choice and consequence in them, and that any claim to the contrary is just marketing.

That doesn’t demean them, because it’d be productionally insane to offer real branching storylines for every single choice you encounter in a game. Including just ten choices like that would lead to 1024 different endings, which in addition to be very expensive to make, would also be nearly impossible to QA.

So what to do if, like me, you want to make a game that presents you with plenty of real choices ? The answer of course is to make them indepedent of one another. After all, the branching problem only occurs if the option of making one particular choice is dependent on a previous decision being made.

Now if you make all of them independent of one another, that’s a bit lame. Because then you have a lot of choice, but you don’t get a lot of consequence, which kind of ruins the party.

This is a powerful mechanic, because it allows you put in a number of choice/consequence situations where the consequence is just the changing of the value of that variable, and the number of bifurcations is actually the number of points where a variable reaching a certain threshold really matters to the storyline.

That’s very theoretical so here’s an example. If the variable is, how angry is the girl at you, then you can put in several situations in which you can make her angry. If you made her angry enough, then the plot develops along the lines of her leaving you. Otherwise, it progresses along the track of you still being in a relation with her.

To make matters more interesting, you then make it so that the girl being angry at you is also used to drive forward another plotline, e.g. your relation with her father. This relation can also be affected by e.g. how much money you are making for him. If she leaves you, but you make tons of money for him, he’ll still be happy about you, progressing along his “I’m happy with you” track. But if you don’t make enough money for him and you leave his daughter, then you might go down the other track. Etc… etc… etc…

Needless to say, you end up with enormously complex story graphs when doing these kind of stunts, but it’s quite a powerful method for giving the player the illusion of there being really a lot of choice and consequence in a game.

You can hear this one come from miles in the distance, but it’s what we’re fooling around with in our next games, Dragon Commander and the mysterious project E. 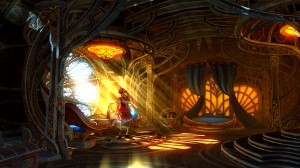 The infamous undead princess. This screenshot is really old, and I promise that this is the month in which we'll show new stuff. Bear with us, we've really been making a lot of progress, but we only want to show something when it all fits together.

Our idea is to market Dragon Commander as a game that gives you over 300 choice & consequence situations, with plenty of examples that clearly differentiate it from the rest of the pack. Of course we’re cheating a bit, because we’ve created the entire gameplay around this choice & consequence mechanic, but nonetheless, I’ll consider it quite a feat when we succeed in this.

In Dragon Commander the entire concept is built around a bunch of possible protagonists/antagonists, each having their own story trees that impact the story trees of the the other main characters, with the player being the one that decides in which direction the plot navigates by making a series of decisions. Several of these decisions affect relationship parameters, and once these go over a certain value, the story branches.

What’s really interesting about it all is how the different story trees for the characters interact with one another. It’s made the architecture for this a very complex mess and just the paper design took our design team over a year to complete, but I have good hopes that’ll give us a very rewarding result when the final game comes together. The thing I like the most is that each branch is guaranteed very different from the other branch.

I’ll leave it to your imagination just how complex this all is, but in theory we have over 2,4 million possible endings using this mechanic, expressed as the combinations of possible end-situations our main characters can find themselves in. And because it’s a game of large-scale dragon warfare, you can multiply that by 2, because you also either win or lose the war.

We’ve never done it like this, so it’s a bit of an experiment for us, but as I mentioned, it sounds good on paper and I think we’ve been clever enough in our approach that we’ll actually manage to accomplish it decently, but of course, the verdict as always will come at the end.

If anybody can give me examples of other games that really exploit the mechanic described, I’d be very interested to hear about them. It’ll help me in convincing people that yes, we’re really doing this, and yes, it really can be pulled off. Right now my biggest problem with pitching Dragon Commander is that people think we’ve gone completely bananas 😉