We’ve been very silent about Dragon Commander, but that doesn’t mean nothing is happening, on the contrary. It’s more off a silence before the storm than a silence because we have nothing to tell you 😉

The quick and dirty of it is that ever since we decided we were going completely independent on this, we’ve had to build up our own publishing team, which admittedly, and tbh also typically, I underestimated a bit.

This impacted our magnificant buzz plans, because we decided early on that we weren’t going to let the publishing affect the development.

This also meant that as long as the publishing team wasn’t assembled, who needs to do the buzz work and create all the required assets,  we were a bit impaired in our ability to talk as much as we’d like to about the game.

But we’re getting there, really 🙂 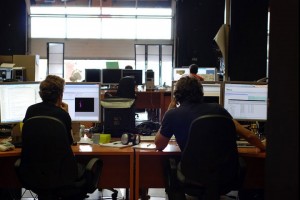 What the hell have we been doing since we've announced Dragon Commander ?

Additionally, we’ve also been experimenting with the gameplay of Dragon Commander, a lot. At GDC, one of the best pieces of advice we received, came from Max and Erich Shaefer, who told us that with a game that blends so many things like this, there’s a high chance of success if we take our time, and only release it when it’s done, as in, really done.

Since that’s the very reason we went independent, it sounded like music in our ears, but it was also a good reminder that we may not screw up on this one. Which is why we continued experimenting with the gameplay, way beyond what would be allowed in a typical production.

So, where do we stand today ?

On the publishing side, our set-up is pretty much complete. If you’re interested what we think you need to publish, here’s an overview:

We’ve hired Thomas a.k.a. the movie guy, who’ll be creating plenty of videos that we’ll be releasing throughout the year, with several of them actually ready.

We’ve hired Thomas (we have a few Thomas’ over here), a.k.a. the website guy, who’ll take care of all of our websites (we used to do them between soup and potatoes), starting of with the Dragon Commander website.

If you read some my previous post, you also know we’ve got Sergei Klimov as a director of publishing, who brought with him years of experience and is ensuring that the game will be for sale pretty much anywhere in the world, on pretty much any channel you can think of.

We also engaged the services of Katya, our head of legal, who’s protecting us against all the wolves out there and ensuring that when we make a sale, we actually get paid for it.

We’ve got Tom & his team at Evolve PR, probably the indie PR guy, taking care of preparing all of the PR and ensuring that we get the coverage we deserve 😉

We’ve also hired Raze, who helped countless of Divinity players in our forums with solid advice over the last couple of years, to take care of moderating the forums as well as spreading the word to other players.

Together they form the team that will be running things from within Larian in close cooperation with distribution partners all over the world. Over the last months, we’ve been showing them the game, collecting their offers, and now it looks like we’re getting in the phase to decide who our partners will be.

Our major focus right now is closing these deals now so that we can ensure all PR & marketing efforts are coordinated. Once that is done, we’re basically ready to release an avalanche of news re: Dragon Commander.

On the development side, we’ve been experimenting, heavily.

As a quick recap, Dragon Commander is a game that is played in several turns. Each turn, you make decisions in a RPG fashion that affect the flow of the game. You research and invest in magic & tech, upgrade your dragon & fleet, and decide how to run your growing empire and what territories you want to attack. Then, you engage in combat, using your dragon & fleet side by side to defeat your enemy.

At this point, we’re pretty much done with how the RPG part will work, are in the middle of dealing with the strategy part & have changed the combat gameplay drastically so that it has much more depth.

The big problem we had with the combat was how to ensure that controlling both your dragon and your fleet at the same time was fun. It took a lot of iterations and try outs to get that balance right, but I think we finally cracked it.

I played the latest version of the combat phase last night, and as I was playing my phone rang. I glance at the number, realized I had to pick up the phone, but felt angry that I couldn’t pause nor save the game yet, meaning that I was going to be slaughtered by the AI. I took that to be a good sign.

Mind  you, its’s not finished yet and I needed to imagine several other things that needed to be in place to make it really fun experience, but I found that at this point it was easy to see what was missing, meaning that I think we’re well on our way to make something cool. But if it turns out it’s not, I guess we’ll probably backtrack again, and try something different. As I said, the best piece of advice we received was that we need to make sure it’s done well, and it’s our intention to live up to that.

We’ve also switched game engines. Were the previous build of DC that we’ve shown to you at Gamescom was still running on the DKS engine, we  were so happy about the engine tech used in project E, that we decided to switch Dragon Commander to project E’s engine. That took some time, but it’s now concluded, and I’m quite happy with the results of that move, considering it one of the best decisions taken on the dev side in the last year.

This obviously all sounds abstract without any video supporting it, but we want to make sure that when we release footage, it’s seen by as many people as possible, which is why we’re pushing on the brake until our publishing team is ready with their preparations i.e. all videos are in place, the website is done and our local distributors are lined up.

The big date for us will be E3. For the first time ever in Larian’s  history, we’ll have our own booth there (a small one 😉 ) and in addition to showing off Dragon Commander, it’s the also the place where we’ll finally be announcing project E. Probably need to put one of those countdown timers online, they seem to be popular again 😉