[In which I discuss a mistake Larian made, how we came to make it and what I learned from it ]

Today we released Easter Egg Invaders, our first free Iphone game. Because we’ve been having a hard time coming up with ideas on how to market this one, I thought I might as well give you the fully story of what happened, and how we came to make Easter Egg Invaders. If you ever contemplated making an Iphone game, you might want to read this one. 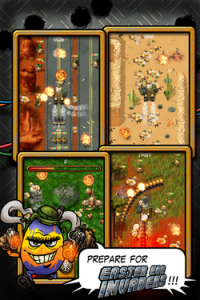 This one for sure is no RPG

Just so you know, I’m writing this in an effort to move you to click on the link and download the game to your Iphone if you have one. It’s free, so your basic cost is going to be your bandwidth 😉

Anyway, on to the story of Easter Egg Invaders.

Last year, a guy who used to work for me and who I was rather fond of but hadn’t seen in several years, suddenly called me and said he urgently needed to see me. I agreed to meet him, and listened to a story I had heard already a few times before.

Inspired by games like Angry Birds & co, he figured he too could become incredibly rich by developing an Iphone game, so he took all of his savings, contracted a freelance artist and a programmer, and set to work making the next killer Iphone game. Several months later, he ran out of cash, with nothing else but a working prototype, a 2D level editor and basic gameplay.

He felt it would only take a couple of extra weeks to finish the game and fulfill his dream, so he wanted to know if I could help him. I assumed my game developer mogul posture, told him that in my opinion the entire Iphone game market was one big red ocean, red with the blood of competition and price erosion, and that I didn’t really see how Larian could manage to do something in that area. Our speciality was the games that retail at 49,99 or 39,99 and we knew nothing about games that are sold at 0,79 or god forbid, were free to play.

But he kept on insisting, and figuring I hadn’t done my humanitarian deed of the year yet, I finally budged and said, ok, we’ll do it. In the back of my mind of course I also thought, you never know, and I also thought it was a good opportunity for us to learn how the Apple submission pipeline works, something we had heard already a few horror stories about. Besides, it had been a long time since we’d done a small game like this, so the idea kind of appealed to me. Made me feel young again 😉

It was clear to me that he was far away from having a finished game, but I thought it would only take a couple of a guys a few months to complete the game, so our investment wasn’t going to be that big. The game at that point was  known as Jungle Fever, involving a tank and many guys that needed to be killed, and the only thing I liked about it was that you could play it with one finger 🙂

We changed the entire concept, put in eggs instead of tanks, a construction worker & a bulldozer, alien chickens and added a light strategy mode in an effort to put in some gameplay. I won’t even try to explain our thought process here 😉

After several months of work, we had something that looked like a game, but I really had no clue who we made this game for. In typical fashion, we’d spent more work on it than originally thought,  and now that it was finally finished, we somehow needed to market this game.

Because I really had no clue, this thought process took quite a lot of time, so much time in fact that one day the producer for that game came to me and told me – we cannot submit it anymore. Apparently, once you create an entry on the app store for a game, you need to submit it within 45 days or so, and after that you can’t submit it under the same name anymore. Great I told myself, that means that at least we learnt something about the Apple process. But not great, because now we need to change all the artwork in the game to accommodate for new name.

We changed the name, and I kept on wondering how to market the game. Then, the guy who had come up with the original idea started working at a firm who was doing a lot of Iphone games, and he called me in panic. Look, he said, I’m looking at the sales figures of really well known brands on Iphone and one of them didn’t even sell a 100K units at 0,79 cents. And this really is a very well known brand (which it indeed was) !!! The only thing that works is if you release it for free, and put in some micro-transaction mode. We need to change everything !!!

I grumbled on the other side of the phone, but I realized that he was right, so I asked the programmer responsible if he thought he could make the changes without it interfering too much in his other work, which was a key piece of Project E. Since the programmer is a cool guy (and in need of a girlfriend, so if anybody wants to hang out with a cool programmer, leave a message), he took the game home with him, and made all of the required changes to introduce a garage into the game, which is basically a glorified in-game shop.

But that still didn’t solve the problem of how to market it. So in the end I resorted to the cheapest trick I could think of – tie it to an event, hope that Apple likes it enough to put it on its front page during that event, and pray. Not much in terms of marketing strategy, but by then I wanted to be done with it, because my initial assessment, that’s this market is so crowded that you need to invest a lot into the marketing of the game and be lucky, still held.

We made sure that everything was in place to get it ready for Easter, submitted it in time to Apple, and lo and behold, it appeared yesterday on the App store, just in time for Easter ! We even came up with the most cheesy slogan ever – “this Easter the eggs will hunt you” 🙂

Of course, in the process of submitting, we forgot to click on a button which activates the in-game transactions, so the initial release happened without the one thing that actually could help us generate back a bit of the investment we made in it, so that was another thing learnt. We obviously immediately did an update, but you can’t do that just like that, so we have to wait for Apple to accept the update, which I think is probably the most important lesson. It needs to be right, right away, because contrary to other digital platforms, changing something on the app store is a long process.

Anyway, that’s the story, so now that it’s done and out there,  do I think it was worth doing this game ?

Well, my kids like the game, and my little boy is really proud when he manages to kill the alien super chicken invader, so I’m happy our little Iphone game makes him smile from time to time.

From the point of view of added value for our studio, I don’t think we’ll make some money with this, but then again, I knew that up front.

We learnt a couple of important lessons about how to deal with submitting something to Apple, which is going to very important for us when we’ll eventually release our RPGs on their platforms. A lot of things went wrong that I wouldn’t want to go wrong on a big release, so in doing this trial run, we probably saved ourselves a lot of future money.

And I also realized once again that it’s key to identify who you’re making a game for prior to actually making the game. The fact that it was very hard to identify the target audience for this game was paralyzing. I’ll make sure sure not to make that mistake again. Positioning is important.

As a final take away, I cannot repeat enough how careful you need to be before you commit all of our savings on trying to enter a market that wrongfully advertises itself as super-accessible. The original designer of this game was lucky that it got made in the end, but I’m sure there’s plenty of stories out there where there was no such luck.

Happy Easter, and don’t forget to click on this  link !!! Because otherwise, this Easter the eggs will come to hunt you !!! 🙂