[In which I discuss my doubts about going to E3]

I’m a caveman when it comes to publishing.

Today I learnt why I shouldn’t blush when spending ten of thousands of US$ when it comes to E3.

What happened was that I was checking our budget, and went slightly white at the expenses we were making for the announcement of project E.  Bluntly put, I was looking at numbers that made me think the company was hemorrhaging cash in an uncontrolled manner.

What frightened me the most was probably the sheer amount of transactions going on, and what they added up to. 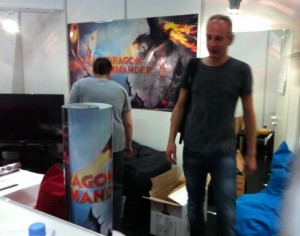 Yep, it' that's time of the year again - Larian will show project E at E3 and it turns out setting up a booth there is an interesting financial adventure

You see, when you’re a developer, and you spend 10000KUS$ on something, you usually know what you pay for. More than likely when you make an expense, you debate if there is any way of doing it cheaper, and think sufficiently long and hard about it.

Not so much in the publishing world. In addition to your regular expenses, there’s a veritable shitload of little expenses that are made ad hoc, and when you add them up, they make for scary numbers. Especially if you didn’t plan for them, but find yourself confronted with them out of necessity.

It’s something I need to get used to it, or I’ll have serious cardiovascular problems by the time these games come out.

Some time ago, we decided that it’d be a good idea to have a small closed booth at E3 to show project E. When I say small, I mean really small, as in as small as it gets. Now the smallness is nothing to be ashamed of, as the floorplan indicates that a lot of our more famous colleagues decided on the same booth size, but … well, it’s still small.

That’s not all of course. We obviously also need to man the booth, and since we have two games to show plus out-of-booth meetings to attend, we need quite some staff, even if the booth is small.

Cost – approximately 8000US$ in planes, cars and housing (We’re flying in from Belgium)

Because we are showing two games, we figured it’d be a good idea to have a wall in the middle of the booth so that we actually have two booths for the price of 1. Yes sir, we are clever little devils at Larian !

Because we also want to make it a bit cosy, we figured that instead of the ugly grey these standard closed booths come in, it’d be cool if we’d have our walls in black with a red carpet, just to set us apart a bit.

Well, clearly we’re not going to pay that much black walls and a red carpet, so we figured we might as well bring our own paint and carpet.

Unfortunately, it turns out you can’t because only union workers are allowed to do anything on the show-floor, and I really mean anything. Needless to say that with such a monopoly, the prices of these workers aren’t exactly competitive.

So given that red and black are out, we thought we at least should have the dividing wall, or our clever little plan would fall apart.

I don’t know about you, but I thought that was too much for something as stupid as a dividing wall, hence the decision was made to scratch the wall and do something so infinitely clever and cunning that I can’t write about it here. (Spoiler: Essentially it boils down to stealing Crytek’s wall)

Anyway, as hardware is also required to show the games on, and because it turns out the price of renting hardware is as high as buying it, we figured we might as well buy the hardware and give it away to some friendly soul instead of filling somebody’s pockets, because flying it back to Belgium would probably add up to doubling the price. Perhaps we’ll even organize a giveaway contest on our facebook pages or on this blog 😉

Cost – 8000US$ (+whatever it’s going to cost to pay the union workers to carry the hardware in and out because you’re not allowed to carry stuff inside either, at least not if it can’t be done by one person without any assistance from a device – yes, it’s a good monopoly)

Now, the intention of going to E3 is to make sure people write about us, but obviously if we show the game to the magazines only at E3, they won’t write a lot about us because online press will  have released all the details already i.e. we won’t help selling magazines, and if we don’t help them, in generaly they don’t help us 😉

So we therefore decided that we were probably be better off inviting some of them to our offices ahead of E3 so they get to see the game, have time to write their article and publish it, just in time for the announcement.

Now, there’s a whole bunch of markets where the game will be in stores, and at minimum we want coverage in at least 1 magazine per territory. As we’re the ones doing the inviting, that means we need to buy them a ticket, house them and feed them, or otherwise they won’t come.

But when the journalists come, we’ll probably have to give them something to remember us by. That seems to be the norm. So cost …

I guess I can stop now because I you probably get the general idea – just covering the basics got me to 45KUS$, and that’s not counting the unforeseens.

To some in this industry, that’s peanuts, to others, that could be a significant portion of their development budget. To us, as developers, it represents money we could spend on getting an extra programmer or artist to help out with our overfull schedules.

So the natural question is – is it really necessary ?

Because I’m the caveman, and couldn’t figure out the answer, I called our publishing guru, Sergei and asked him to explain to me again why we’re spending 45KUS$ on E3.

Without a hitch, he started lecturing me:

When we go to E3, we get in touch with hundreds of journalists that we don’t know and who we otherwise wouldn’t reach. Call them unidentified PR if you want.

Every day we’ll have back to back meetings with up to 6 journalists per session. Perhaps they are not from the most important magazines in the world, but it’s the only chance we have of showing them our game and telling them what our vision is.

We did the same thing at Gamescom. We showed the same presentation of the game to anybody who cared to stop by, and we didn’t even ask them from which publication they were, because we just want to get the word out. Remember how pleasantly surprised we were when it turned out that that young guy was in fact an incredibly influential writer ?”

At which point I said I got the message (he has a tendency to rant) and ended the conversation. He’d given me what I need which is something that allowed me to quantify the investment. IF I divided the 45K by the number of journalists we were going to see, which at best will be something around 300 (2 meetings with 6 journalists thanks to Crytek’s wall for 30 minutes times 3 days), that gave me the nice round number of about 150US$/journalist.

Converted in euros, that’s not that bad. If what that journalist writes leads to at least 10 people buying the game, it’s even pretty good.

So I became a caveman who discovered fire.