Three sicks guys sitting in front of a TV screen in the middle of the night – one has a splitting headache, the other a bad case of chinese food poisoning and the third, being myself, has a high fever.

What are we doing ? Preparing for a horde of journalists invading our offices to check out our new games.

It’s not going well – Dragon Commander has been crashing randomly throughout the rehearsal presentations, and one of main features of project E game doesn’t seem to be doing what it should be doing. 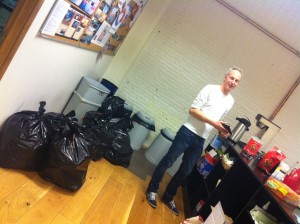 I'm going to fire the cleaning crew - really, I am. that's what this blog entry is about 🙂

We’ve been ambitious in what we wanted to put in this demonstration, an now we’re paying the price.

One of the youngsters in the office asks me – are we going to make it? I smile reassuringly, and treat him to one of my warstories from past PR events. He walks away, slightly confused. Not sure I was that inspirational.

Speakers scream – “Project E – Yet another succesful build”.  We look up, hopefully, maybe this will be the one that miraculously fixes the problems.

Five minutes in our hopes are shattered. The game locks up when trying one of the more advanced things.

We agree that we’ll work until 2 am and then come back the next day – it happens to be a holiday.  We’ve been at it for a few weeks now, so we’re tired. I’m also proud, because a resilient core team refuses to admit defeat in the face imminent disaster.  As long as they struggle on, there’s hope.

We’re long past thinking about the ethics of faking things in presentations – it’s accepted in our industry, everybody does it, even if nobody, including the developers themselves, like it. It’s a waste of work after all.

We agree to follow two tracks – one team tries to get the real thing working again, the other rapidly develops a plan B implementation that looks like the real thing. If first team fails, we’ll go with B. We also cut a couple of things from the presentation. We nod in agreement and go home.

It’s raining. I drive a designer home, get stuck in a traffic jam caused by a series of cars window-shopping the local prostitutes and curse – I’m really feeling sick and want to hit my bed asap.

Arriving home, my newborn son, two weeks old, decides it’s concert time. My girlfriend is trying to appease him.  She looks at me, smiles but I can see she’s tired.

I feel too sick to help her and hit the bed, coughing to the rythm of my baby boy’s cramps. I drug myself with painkillers, and try to get some sleep.

The next day I can hardly talk and everything hurts. A useful feature to have at this time I think. I arrive in the office later than agreed – I feel bad about that, but thankfully the emergency team is already hard at work, and they don’t seem to mind.

They’re making progress. I look at the games, cough & smile – they do look good.  It’ll be worth it.

I start writing out the notes about the things we definitely want to communicate. Vision, story, main features, nice to knows, history of development, where the games fit in the Divinity universe etc…

Next I start wondering about what questions they might ask us. We don’t have all the answers yet, we’re still developing, but it’s better to know up front what you’re going to say instead of improvising.

On my desk there’s a whole bunch of print outs dropped there by one of our producers– it’s reviews written by all the journalists coming, some of them are google translates. I start reading so I know who’l l be sitting in front of me, and what to watch out for. No use trying to pitch fancy dialogue options to a guy who hates dialogues in games. Luckily it looks like those aren’t part of the mix.

I make a mental note to congratulate our publishing team – they managed to bring over key press from almost each country we want to target – US, UK, France, Germany, Poland, Russia, Italy, Spain, Norway, Sweden, Benelux, etc… even the most important games site from Romania.Not bad for a small independent developer. We should get some coverage out of this.

The cleaning crew didn’t pass by. We need to fire them, this is the third or fourth time in a month’s time and the office is a mess. I start cleaning up, waiting for the team to tell me that they’re done. Not much I can do now except wait.

I reflect on the games we’re making. So many decisions were made to bring us to this point. Were they the right ones ? Will players get it ? I don’t know –no use in second guessing ourselves now. I really hope there’s not going to be one over-obvious thing we’ve overlooked that’s going to kill. It happens.

I read a preview of the Games of Thrones RPG– journalists are being tough on it. Eurogamer is complaining that Cyanide shouldn’t have been the one making this game – I think of the similar scenes they must have had in their office when preparing for their big presentation, and find the writers comment unfair. That’s no thing to say. That’s too personal.  He should stick to comments about the game. If this were a book preview, you wouldn’t attack the writer either, at least I hope you wouldn’t. It’s too easy.

Probably not the right time to criticize journalists either I say to myself.

Then I realize that I really shouldn’t care. We’ll be showing Larian games and as long as we believe in them, I really shouldn’t worry. The past has proven that whenever we believed in what we were making, our players had fun, and luckily for us, there’s a whole lot of these players. This despite some occasional very harsh criticism, typically from reviewers not in our target audience.

So I throw away the journalists profile, go to the meeting room where we’ll be doing the presentations, look at the screens and dream away thinking of the final results.

It seems my receptors are accepting the medecine I’ve been sending their way.