So now you know 🙂 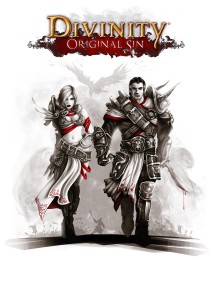 Project E, the secret Larian project I tried to hype by sneakily dropping hints about it from time to time turns out to be a top-down multiplayer turn-based RPG called Divinity – Original Sin.

Judging by the reactions I’ve seen on various forums, about the only thing that apparently didn’t come as a surprise is that it’s set in the Divinity universe. And even that seems to raise some eyebrows, because it takes place before Divine Divinity and not after Divinity II: The Dragon Knight Saga.

I’m surprised by the surprise, so I guess that  now that I can openly talk about it, it might be worthwhile telling you what I was thinking when this game initially saw the light. Before you read on, you should probably have a look at one of the previews – otherwise a lot of what I’m going to say won’t make sense. Also, think of it as contributing to our chances of being covered by these media in the future, because if nobody reads what they write about us, they might lose their motivation to write about us 😉

Here’s a bunch of previews, which are the result of that press thing we did. Of course you can also check out the website, which features a kind of “inside look” video.

So, what was I thinking?

For starters, if you read this blog from to time, you might have figured  that I always wanted to go back to Divine Divinity and finish the job. One of the things that bugged me about that game was that it was originally supposed to have a multiplayer mode, which sadly got lost in the trials and tribulations of trying to ship our first major RPG.

Then with Beyond Divinity, multiplayer was back on the agenda, but the Divine Divinity code had evolved to the point that putting it in would’ve meant rewriting everything, and at that time, that was impossible.

And then, came Divinity II. That one too was supposed to have multiplayer (I have a video from a prototype of that which I’m trying to find so I can post it here). Sadly the multiplayer was scratched when the publisher realized what costs this would bring on the QA front, especially on console. In hindsight, given the effort it took to get Divinity II ready, they were probably right about canceling the multiplayer, but that didn’t prevent me from feeling frustrated about the entire thing, because that was the third time.

So now that we’re finally publishing ourselves, it shouldn’t come as a surprise that multiplayer was one of the very first things on the list. The why of it is quite simple – I really miss a RPG where you can play together with a friend, and discuss how you’re going to handle things. Nobody’s really pulled that off decently in my mind, so I wanted to give it a shot. Personally, I’m hoping that the editor that ships with the game will be good enough to seed a productive modding community, so that I can finally play one of my own games without knowing what’s going to happen & this together with my girlfriend.

The latter is also why I’m so hyped about  this cooperative dialog system we’re hinting at in the video & previews. What’s being show really scratches but the surface of our ambitions. I actually don’t understand why nobody did this before –  the moment you start thinking about making a real RPG with cooperative multiplayer in there, you can’t but end up with something like this. Anyways, if we’re the first & players like it, I guess that’ll be something cool.

Also, don’t underestimate what we can do with a system like this in single-player. If you make a storyline where you ensure that there’s always the opportunity for interactions between party-members to be potentially conflicting, you can make good use of that in single player too.

Next on the list of reasons why Divinity – Original Sin seems to have surprised people is the turn-based combat system. That one comes from the desire of doing something like the first Fallouts. I always wanted to do a turn-based game with action points but my problem was that I couldn’t find a publisher who agreed with me.

Active-pause was considered for some time (and we actually started out like this), but in my heart I really wanted to make one of those games that has epic tactical battles, where you really have to think how you’re going to defeat the enemy. And because I’m occasionally very impulsive, one morning I stormed into the office and told the team that we were going to ditch all the hack & slash stuff and go for turn-based. I was ready to go all despot on them should I encounter any resistance, but to my surprise, they were actually quite supportive of that idea. Then I discovered they were a little bit too supportive, because before I knew it I had an ultra-hardcore system on my plate. Eventually we settled on something that I think is quite accessible, but still offers plenty of opportunity for tactical depth.

The next cause for surprise was that Divinity – Original Sin wasn’t a continuation Divinity II: The Dragon Knight Saga. That was one that could be predicted.  I could tell you a lot of blah of how we needed to first fill in some gaps in the storyline before we end the story of Damian & his father, but the main reason is that we really did feel like doing something different. I know that some people feel disappointed that they have to wait a bit longer, especially those who only got into Divinity because of DKS, but the desire to go back to the first Divinity was quite strong, especially since  there’s so much stuff we can do now which we couldn’t at the time.

And finally of course, there’s the top down. You don’t have to look far to find that reason. It’s all the Ultima stuff, which you can read about here. In Divine Divinity, lack of time prevented us going as far as we could’ve gone with that, and my hopes are high that this time we won’t have to make the same compromises.

So to end, I want to say that I have no clue if we’ll succeed in satisfying all of our ambitions, as there’s quite a few in there.  But at least now you know that once you get the final game in your hands, what the hopes & aspirations behind it were.

Let me know what you think!