I had a big discussion the other day. Somebody was challenging the entire philosophy behind what we’re trying to do – i.e. taking our destiny in our hands and incrementally earning sufficient profit to make the very big RPG that will dwarf them all. 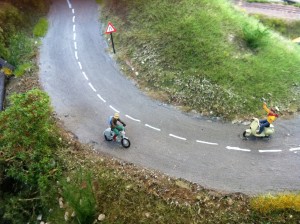 The road we picked is long, very very long, and maybe we're not traveling in the fastest possible manner, but that doesn't mean we'll not get there in the end.

His reasoning was that that would never work, saying that the profits that can be made by a single game of the type we’re making is limited, and that unless we branch out in a variety of different markets, the reality of our burn-rate would always ensure that our funding would be too limited to achieve the vision behind it all. He also said trying to make a cool game wasn’t really a strategy, and accused me of not having any vision for my company.

Faced with such an onslaught of criticism (he had other issues) and seeing that he was very convinced about his arguments being infallible, I didn’t counter-argue that much, opting instead to think the matter through and do a little bit of introspection.

I didn’t care much for the vision statement because different people have different priorities and mine and his don’t necessarily have to match, but the one argument that hit home was the one that questioned if profit on our future games would be high enough to defeat the realities of our burn-rate, and allow Larian to grow sufficiently to make the game I really want to make.

By coincidence I then met some fellow developers who not so long ago thought they were going to go under, only to find themselves today among the stars of the games industry firmament. They had just visited a smaller developer who does work for hire to fund its own dream game. They told me they had very big doubts about the small developer being able to reach its aspirations, because the work-for-hire the small developer was doing, would most likely never give them enough funds to finish the dream game fast enough to make an impact on the market.

To illustrate the point, here are some simplified numbers. Actual dream games being funded by work for hire will have different needs, but the same reasoning will apply:

If you have a 40 man team, and the employer cost is say 6K€, then one year of development will cost you 2,88M€. Given that most games take a few years to make, this means you rapidly end up with a need of over 5M€ to fund one game. That means that if you want to fund your own game with work for hire, and your game needs 40 people for 2 years at 6K€/month, you need to earn 5M€ before you can afford to spend 2 years on your own game. So, if you do work for hire for 2 years for somebody else with your 40 man team, you need to earn 10M€ to actually earn the freedom needed to develop your own thing.  In the current market, that’s actually a tough proposition and rare are the jobs in the games industry where you are paid double the employee rate, so the reality is that you probable need to do even more work for hire.

It’s the very trap Larian allowed itself to be caught in for many years, and it took me quite some time to muster the courage to try to escape from it. There’s a certain reassurance to be had from money coming in as it goes out, rather than just seeing it go out. To reach escape velocity, I had to attract investor money and draw upon all of the resources we’d built up over the years, and to be honest, not a day goes by without me questioning if it really was the right decision.

And here was a guy telling me that all that wasn’t going to be sufficient, because the burn-rate of my team would continue to burn to such an extent that there’d never be enough profit to fund the next growth step.

The scary thing is that he might have a point. In order to do my thing, I need to get something like a 100 man team for say 3 years. That’s the equivalent of over 20M€ in funding, which clearly is a lot of money. Yet, it’s the type of budget not uncommon for the really big games. These budgets are justified by selling over a million units, so if we actually want to have a shot at making my very big RPG, the shortest route would be for our new games to do exactly that – sell over a million units. Otherwise we indeed run the risk that the funds we generate are sufficient to let us survive, but insufficient to let us grow significantly.

Over one million units really is a lot, and to be honest, I don’t think we’ll manage that, not with the gameplay experiments that we’re doing.  My expectations are that we’ll need to release a few more games before reaching that point, but then again, we just won best RPG of E3 on jeuxvideo.com with Divinity – Original Sin – so that’s a start, right ? We can dream 🙂

Our discussion was interrupted before it was finished, so I expect we’ll take it up again, but now at least I know what I’ll tell him when he asks me again what our strategic goal is – to sell over a million units using our independent approach in such a manner that it generates sufficient funds to make the very big RPG that will dwarf them all. I doubt it’ll make an impression on him, but really, my roadmap is as simple as that – it always was. And now it’s quantified.

Now, if somebody could just give me a bloody manual how to do exactly that, that’d make my life a lot simpler 😉