In a previous entry on the joys of making the Divinity Anthology, I mentioned that I was fairly stressed about some re-design work, but to be fair, that was a bit of a euphemism. What I should’ve written was that I was experiencing sheer terror at the thought that we’d made some incredibly big design mistakes with Divinity: Dragon Commander and that there was no way we could still correct them in time.

It became so bad it kept me awake at night (this game is important for Larian), and together with a whole bunch of other shit going on simultaneously, that meant I started to look like the zombie in the boxshot of Divinity II: Flames Of Vengeance.

To understand the problem we were dealing with, I first need to explain a bit about the architecture of Divinity: Dragon Commander. 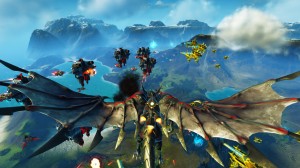 Dragon Commander: wreaking havoc in the skies. But that is not all…

The main design of the game consists of three phases that interact with one another to make you feel as if you are indeed a real Dragon Commander. The idea is that feeling like a Dragon Commander is fun –  I certainly always wanted to feel like one 😉

Phase 1 consists of a hub where you talk to your crew, councilors and love interests, making all kinds of RPG-style decisions. It’s also the place where you invest in technology research and buy new stuff.  The output of phase 1 is new unit types, new magic powers and favors that you can call upon in the other phases. Phase 2 can be compared to an advanced strategy board game where you decide what unit types to buy and what units will attack which countries. Phase 3 then,  is where you engage in combat in the countries you attacked in phase 2 (or defend against enemy attacks).  Combat takes the guise of a 3D RTS where you can also take control of a hero-unit: the jetpack-wearing dragon which has all kinds of special powers. All phases are supposed to affect one another so that the whole becomes bigger than the sum of the parts.

For a long time, our main problem was phase 3, the combat phase. Balancing the dragon and RTS components was no easy thing, and it took a lot of iteration to come up with something cool. We went from a lot of action to almost no action, all the time trying to blend the control over your dragon with the feeling of also being in control of your fleet(s), and ensuring that what you did in combat had an impact on the other phases.

While the dragon/fleet on its own was already very complicated, getting it right in such a way that it tied in well with the strategy phase turned out to be a far bigger pain than we’d ever expected. Still, we continued developing because we assumed that our skills were sufficiently good to eventually find (or stumble upon) a solution.

My very first agent in the games business, Ben Sawyer, once told me that in any production, there is a moment – typically when a deadline becomes tangible – where it seems disaster is imminent and you feel like you need to start all over. He continued that it’s important to recognize this because if you succumb to the temptation of starting all over, you might indeed end up creating the disaster of having nothing to show at the end of the road.

I’ve had Ben’s moment happen to me a few times before and sure enough, last month it hit me with Dragon Commander. We weren’t making any real progress on linking the phases well together, and to be fair, I wasn’t enamored with how the RTS had evolved either. It all looked very nice, it controlled well and it was even entertaining, but it didn’t grab me the way other strategy games grabbed me. And what definitely didn’t work in my opinion was the link between the different phases. In my mind that made it a complete disaster, but I have a tendency to exaggerate 😉

Ben’s advise was based on the common wisdom that creators have a hard time distancing themselves from their creation. While occasionally you find guys who think they made something of great value whereas in reality it actually stinks, in companies like ours you are more prone to encounter creators who manage to focus only on the faults of their creation instead of its merits. This indeed makes creators the worst possible judges of their own work, because they might have something good without even being aware of it.

Knowing this, I struggled for quite some time about what to do with Dragon Commander. Was I being too critical ? Was it really that bad ? Perhaps it was just lacking polish . That alone can make a big difference.

I hesitated for quite some time and you could even say I suffered from analysis paralysis. My biggest problem was that I realized that if my feeling was right, we’d need quite some backtracking to correct our problems, and that inevitably would have consequences for the entire production.  So I kept on trying to find ways of not having to backtrack, because changing course midway really isn’t a trivial matter, not in the least because enforcing change means surmounting quite a lot of internal and external resistance, and this always causes collateral damage.

But on the other hand, not changing course when necessary is what gets big boats to sink. There are enough examples of that.

My uncertainty about what we were doing became large enough to compel me to freeze a number of production tracks, and I told the team they had to wait until we were sure we were indeed going in the right direction.

We started looking for different mechanics to solve our issues, but because we kept on thinking about production issues and all the work we’d already done, we limited ourselves to variations of things we already had. Unsurprisingly, we only managed to make small improvements, but nothing fundamentally changed. 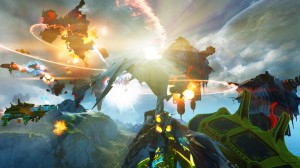 And then, really only then, did we go back to the original concept, and started wondering, why the hell isn’t this working? Is there something fundamentally wrong with the original idea? Were we that blinded? Or are we just inept at executing it?

And as we looked at the original concept, it dawned on us that there was nothing wrong with it. We had just refused to do one thing because it made our jobs harder, and we didn’t want to take more production risks than we were already taking.

Our mistake was that the entire game was taking place in the air.

Now, it’s not as if we didn’t want to include ground combat from the very beginning, but because of all the AI misery that’d cause, we’d decided to steer away from it early on.  Thinking back, that decision had actually been taken really lightly, without even checking exactly how much AI misery it was going to cause. We’d just assumed it to be a bad idea, based on our previous experiences with the flight/ground AI in Divinity II, and we also didn’t really realize at the time what a negative impact it’d have on the gameplay.

Design wise, the moment we envisioned introducing land (and sea) units again, our problems started to disappear rapidly. And as they disappeared, out of the blue solutions appeared for the other problems we still had. Put differently: by introducing land units, suddenly we could get the entire thing working as planned.

I’m pretty sure that there are designers outside of our studio that would’ve seen this right away, but we were so used to blocking off any idea that required something else than air units, that we didn’t even explore that path anymore.

It was only when our despair became so large and the proposed mechanics to solve our issues became so ridiculously out of this world, that we saw what the core issue was. And once we isolated that, it became just a matter of figuring out how many coders we’d need to solve the technology problem.

A couple of weeks after deciding to try land/air/sea, we had a prototype that incorporated land and sea units. After playing only a few combat sessions, it was clear that this was the key. Protecting a bridge on which you’ve stationed some troops with a battleship far in the sea and some bomb-dropping-balloons hovering over feels so much better than just having aerial units duke it out, and the ability to turn into a dragon takes on an entire new dimension when you’re flying so close to the ground. A couple of design sessions later, the entire game was adapted to incorporate the new style of combat, and suddenly everything was crystal clear. We even managed to integrate the different phases in a very elegant way, something I won’t write about here yet, but instead show in a future video. Most importantly, at least for me personally,I went from a sleepless developer in pain to a sleepless happy developer !

All that pain, just because we’d boxed ourselves in too fast. This could’ve ended in disaster and looking back now I’m happy I didn’t heed Ben’s advise and insisted on reshaping the game. For myself, I vowed to let this be the last time that I allow a technologically “easier” route dictate my gameplay. I really should’ve known better.

But it did have its advantages too. Exploring all those dead ends gave us a good insight into what works and what doesn’t, and I hope we’ll be able to use that knowledge to our advantage in the very near future.