I’m writing this on day 15 of our mad PR tour. Flying back from Los Angeles to Brussels to spend the weekend with my family. Then, on monday we’re off to Paris where  27 journalists await us at a press event organized by Focus, our local partner. In the end, we’re aiming to show Divinity: Dragon Commander and Divinity: Original Sin to almost 100 media spread over Europe and the US, and by the time we’ll finish this tour, we’ll have been presenting for over 5 weeks.

That’s quite long and by now I’m sick of seeing hotel rooms, unpacking and repacking PC’s at airport security checks and trying to organize TV screens that do the games justice. I’ll be quit happy when it’s over. My personal highlight on this tour was snatching one hour of free time in Santa Monica so I could go for a run on the beach. Other than that, it’s been one big rush and I’m starting to collect quite a lot of bad karma in the email department because I simply gave up answering. I have some vague hope that I’ll drink a special potion over the weekend and manage to answer all those urgent requests, but past experience tells me that’s not going to happen so I’ll need to figure out something different. 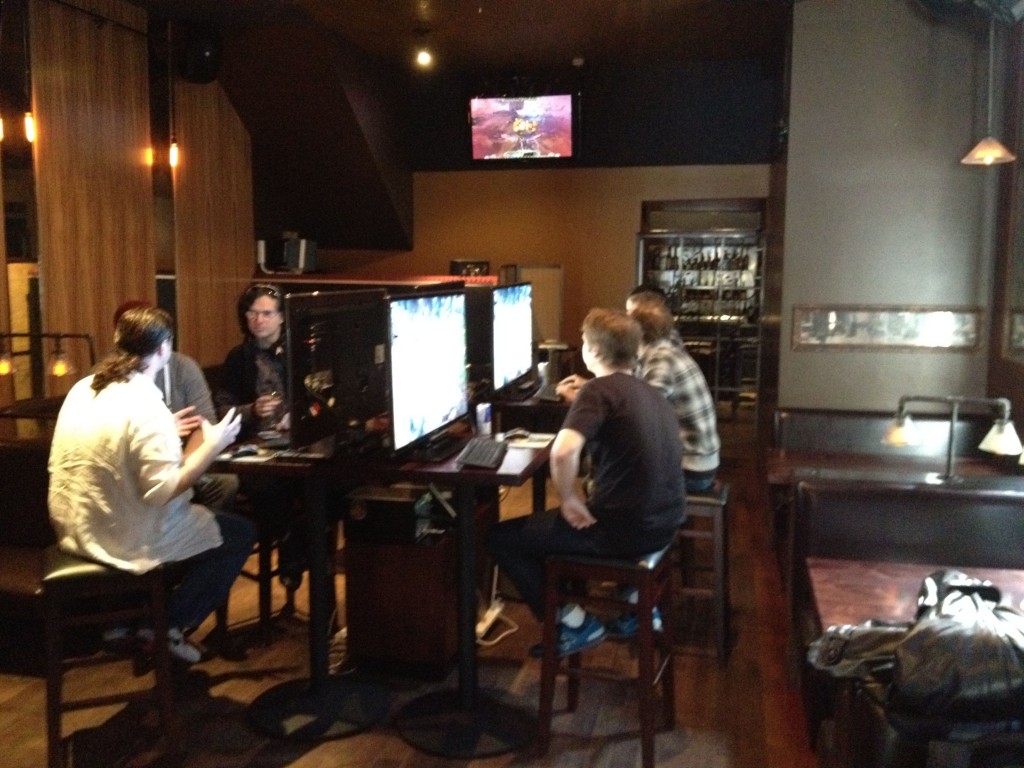 Dragon Commander presentation in San Francisco - there's quite a lot of stuff that needs to be organised for doing these types of things, like getting a place to show the games in the first place

What complicated this tour more than others was that we wanted to show the games in multiplayer, with the journalists joining in. This meant that wherever we went, we needed to ensure there were sufficient screens in place, that we could set up a network, that we had sufficient room and that we had sufficient people to explain the game in addition to the usual stuff. It’s a small miracle that that all worked out, but it did which does say something about the people involved in organising this i.e. they’re good at what they do 😉

Obviously we’ve constantly been googling for our stuff and as articles started trickling through (Rpgwatch,onrpg, co-optimius, gamesradar, rock paper shotgun or strategy informer), there were these moments of elation when we saw something positive being said about our creations and likewise, there were moments of frustration when criticism surfaced. Even after all these years, I still haven’t managed to reach the state where I can say that I’m indifferent to what’s written about my games and seeing the reactions of my co-demo-tour participants, they clearly care too. That’s a good thing btw in my book..

I’m told by our PR agency that the coverage we’re managing to put together is impressive for an independent studio, and come to think of it, I don’t think any of the previous Divinities actually ever had so many previews in the works, despite the publisher backing. At least on that front our little self-publishing outfit is scoring well, even if we have had our problems.

Specifically, there were three issues that plagued us:

One issue was that we’r showing both a RPG and a RTS, and doing hands-on of an RTS with RPG-only players isn’t necessarily the best idea. Likewise, doing hands-on of an isometeric turn-based RPG with a RTS player doesn’t necessarily generate a lot of oohs an aaahs. Whenever we had journalists who didn’t have a wide interest or at least an interest in both RTS’ & RPGs’  we’ve had issues.

Ideally, your local PR partner ensures that you have the right guy or girl in front of you, but that obviously isn’t always possible, especially if you’re showing two games like we are. But the better the PR, the better the match between reporter and the game he’s reporting on, and we’ve seen a clear link between that and the feedback we got, so something to pay attention to in the future.

The second issue was getting journalists to show up. This too is the work of the local PR partner or agency and there we’ve seen very strong differences. I think having two games is an advantage, so we probably shouldn’t have experienced this problem that much, but in at least one instance we did and that caused quite a lot of frustration among Larian’s travelling demo team.  Divinity games have sold sufficiently to merit some attention so if the turn-out is low, something has to be wrong with the approach.

Initially we thought maybe reporters thought the games were too small to report on, but the advantage of doing this with different partners in different territories is that you can actually compare your PR efficiency, and since in general we’ve had pretty high attendance rates, with quite a lot of the big boys showing up, we came to the conclusion that this was more a local problem than anything else. Something to work on.

Finally, the third issue was that we were showing alpha code in an unfinished state and were letting the media play these builds code hands-on, in multiplayer, on 4 machines , with only three of us there to guide them, in situations where sometimes there were 8 journalists present. Because we couldn’t deal with everybody simultanously, inevitably the message of what is final in the game and what isn’t final was lost in translation. This undoubtedly will lead to inaccurate reporting but the only way we could’ve solved this would have been by either a) limiting the area where the journalists could play or b) ensuring that we never had more journalists than we had Larian team members present or c) not do a hands-on.

Since a) limiting the area in a RPG is a pretty bad idea, b) having more Larian members present would mean that nobody would be working on the game anymore and c) not doing a hands-on is a sure way of not getting the journalists to come to our events, I’m not sure how we could’ve solved this, so I’m definitely open to suggestions. I guess part of the problem is that for us, being developers, it’s pretty obvious what still needs to be done and what not, but that’s not always the case for the reporters – especially the younger and thus more inexperienced ones. I think that in the future we’ll literally mark the assets in the game that are stub with the text “stub” – this will probably avoid some confusion.

Anyway, in the end those are but small stains on what has otherwise been a pretty positive tour so far, so I’m not going to complain. It’s just something to remember for next time, even tbh, I hope it’s going to be quite some time until the next time – it really is quite tiring.

Still I’m glad we’re organising these kind of things ourselves now – I’m sure part of our idealism leaks through when we show it to other people and as a result we’re getting enormous amounts of feedback which we otherwise wouldn’t hear (i.e. when it’d be a publisher representative showing the game), meaning that we can actually do something about it now, rather than having to be confronted with it at review time. That makes for a very big difference because of a lot of the stuff people wonder about is easy for us to implement, and we actually do listen.