Almost 3 days into our Kickstarter and we’re at 48% of our goal. For a funding round, that’s pretty good. If we’d make 60K/day every day our studio would be making the most fantastic RPGs you can imagine 😉

But to be fair, everybody, myself included, had hoped that it would’ve gone faster and I’m getting some flak for the timing of the campaign, and how with better messaging/positioning/timing this thing could’ve been flying through the roof. I don’t know, I guess it’s always easier to sail the boat when you’re actually on land (or whatever the saying is), but it’s still early days and I’m a born optimist.

Personally, I think we can still have a campaign that can go way beyond our funding goal, though admittedly, we will need to fix a few obvious things (well, they’re obvious now 😉 ) like the rewards, part of the story we tell (less features, more who and why), and what happens if we fail in this Kickstarter.  Thank you to DarkUnderlord,Robcat and the rest of the gang for helping us get these insights btw.

When I look at the stats of the videos: we have 4452 backers out of 22344 video views at this moment. That means that 1 in 5 people who see the video are backing it. I think that’s an incredible conversion rate, so I’d think that even if we don’t change anything in the messaging,  if we manage to get more people to see our page, we could reach our goal in no time. Something to work on. 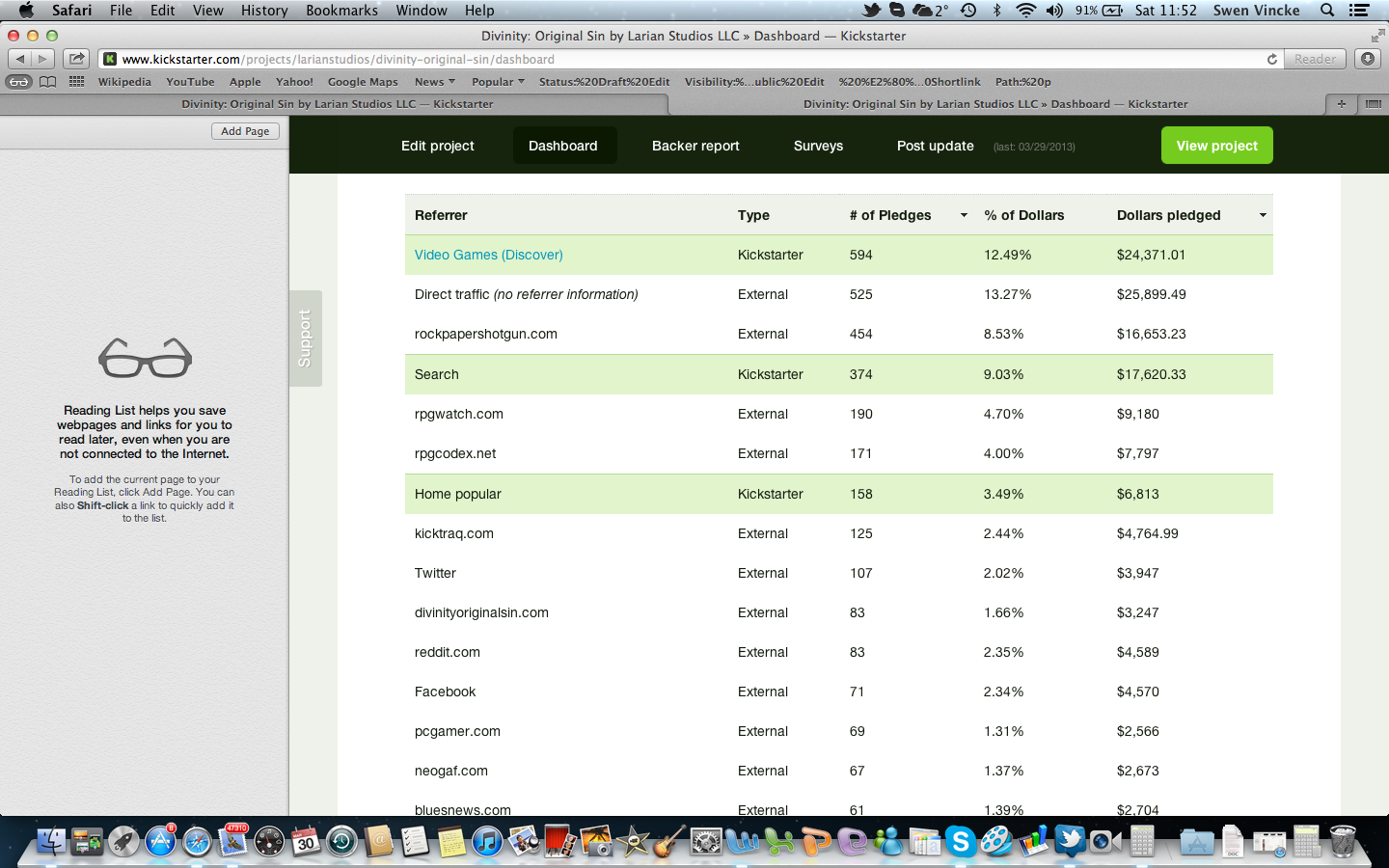 What media help when doing a RPG kickstarter? Some surprising absentees in there (at least to me)

Obviously there’s also GDC/PAX/Easter/Torment/End of month so that doesn’t help, but if we want to give the game the extra pass it needs, we need to start on it sooner rather than later, so we couldn’t wait indefinitely. I already explained that this campaign started a bit chaotically, something I regret now but which I didn’t foresee in the heat of the moment.

But still,  we didn’t know shroud of the avatar and Torment were going to launch when we started to the promotion tour for this game back in early february, and once we talked to magazines, there was a limit on how long we could delay things.  E.g. I just read a fantastic hands-on article in a print magazine that’s telling people to go to our Kickstarter page so if the page wouldn’t be there, that’d be a waste.

There’s been quite a few hands-on reports in the media by now and I think there’s a very clear message coming from almost everybody who played it and who loves RPGS – back this game, it deserves it, it’s clear what they could do if somebody allows them to give it an extra round of development.That message hasn’t been repeated everywhere yet though due to GDC/PAX and I hope we’ll see an increase in video views next week when other media finally post their articles. For instance, there is going to be coverage on IGN (at least they promised), and though obviously, I don’t know what they’re going to write, it will generate some more exposure. If we can get the video views to over 50K and we maintain the average conversion rate and backer amount, we’re probably there already. But our real goal shoiuld be to get the page views high in the 100’s of K’s so we’ll need to figure out how to do that. All help welcome.

We’ll in any case start working on fixing the rewards to include things people really want and then I think we’ll launch a second wave of PR, somehow, so that the video count goes up. And highlight a bit more of the inside of Larian, of the hopes and aspirations we have for our game. I somehow thought that was already pretty evident, but apparently not enough.

If any of you have more ideas of what we can do to push this thing further, I’m all ears.