One week – 6666 backers on our Kickstarter –  a nice number to post another update on.
I am learning so much about our audience by seeing the comments in different channels. The reactions posted are a veritable goldmine of info on who we’re making this for (well at least, the vocal part) and I think it’s safe to say that the ideas we picked up from those posts are already good for quite a few improvements to Divinity:Original Sin. I’m happy with several of the articles that were posted today, especially the ones we didn’t ask for like the one from Eurogamer or this little gem of an interview (in German). Makes all the PR effort feel like it was worth it.
–
I’m also starting to get the feeling that our entire Kickstarter campaign is going to be good for sales of the final game too as I see awareness is building. That’s bound to help in the end. I learnt a lot about what media matters for these type of things as well as who to avoid in the future. Some people and Larian will never click, fact of life. (Don’t worry Roguey, I didn’t give up on you yet, even if I think the odds are not in my favour)
–
It’s also been a good test of how our PR/Marketing partnerships in the different territories work. Because we have several approaches for different territories we can make direct comparisons between what works and what doesn’t. Interesting stuff. If I were to do it all again, I’d definitely change my approach – I’ll write about that in a later update when I have more time and once I saw the entire roll-out. But there’s no denying that in making mistakes we learn, and sometimes it’s better to make the mistakes so you can avoid bigger disasters in the future.
–
I’m also learning stuff about my team. For instance, I have two guys, my lead animator and lead writer, who’ve been camping in London for the last four weeks, recording the voices of AAA actors for Dragon Commander(they call them AAA probably because they can charge us more that way, but admittedly, the actors are good). During the day they direct the actors, record their voices and capture their facial expressions, at night they spend long hours writing additional texts and reviewing existing texts. That’s dedication mixed with talent right there, of a level rarely seen. And they’ve been doing that for a month!
–
I’m feeling very proud about what they’re doing for the moment, and I can only imagine what the result of their work is going to be. I’m expecting it to be really good because the little I’ve seen/read/heard really is top notch. On top of that, back home, some artists have taken it upon themselves to improve the environments in which all that acting is going to take place. It’s going to be stunning. And in such dedication I recognize people who care about what they’re making. It’s important to care. I don’t like people who don’t care.
–
Anyway, you’ll see the output of all that hard work soon enough, but right now, I’m going to head back to my Kickstarter campaign. Got to answer some messages, check the facebook pages, perhaps try again to figure out how twitter really works and check out if Torment will hit its 4M€. Lots to learn from Brian Fargo. He even got Roguey to increase his/her pledge. He might even get 66666 backers. Really well done.
–
Here are the stats btw:
– 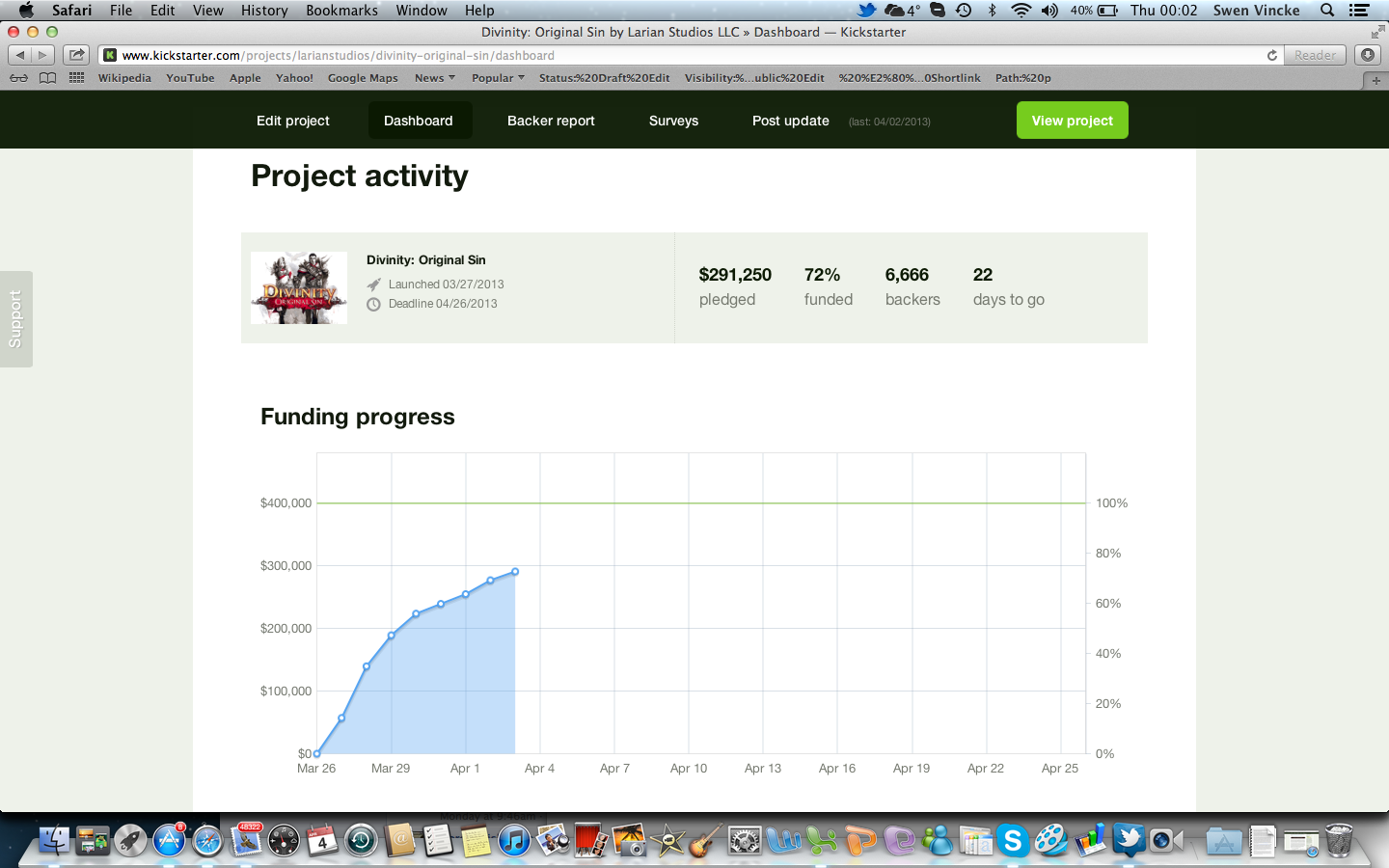 There's a trend there but it's still a bit shaky 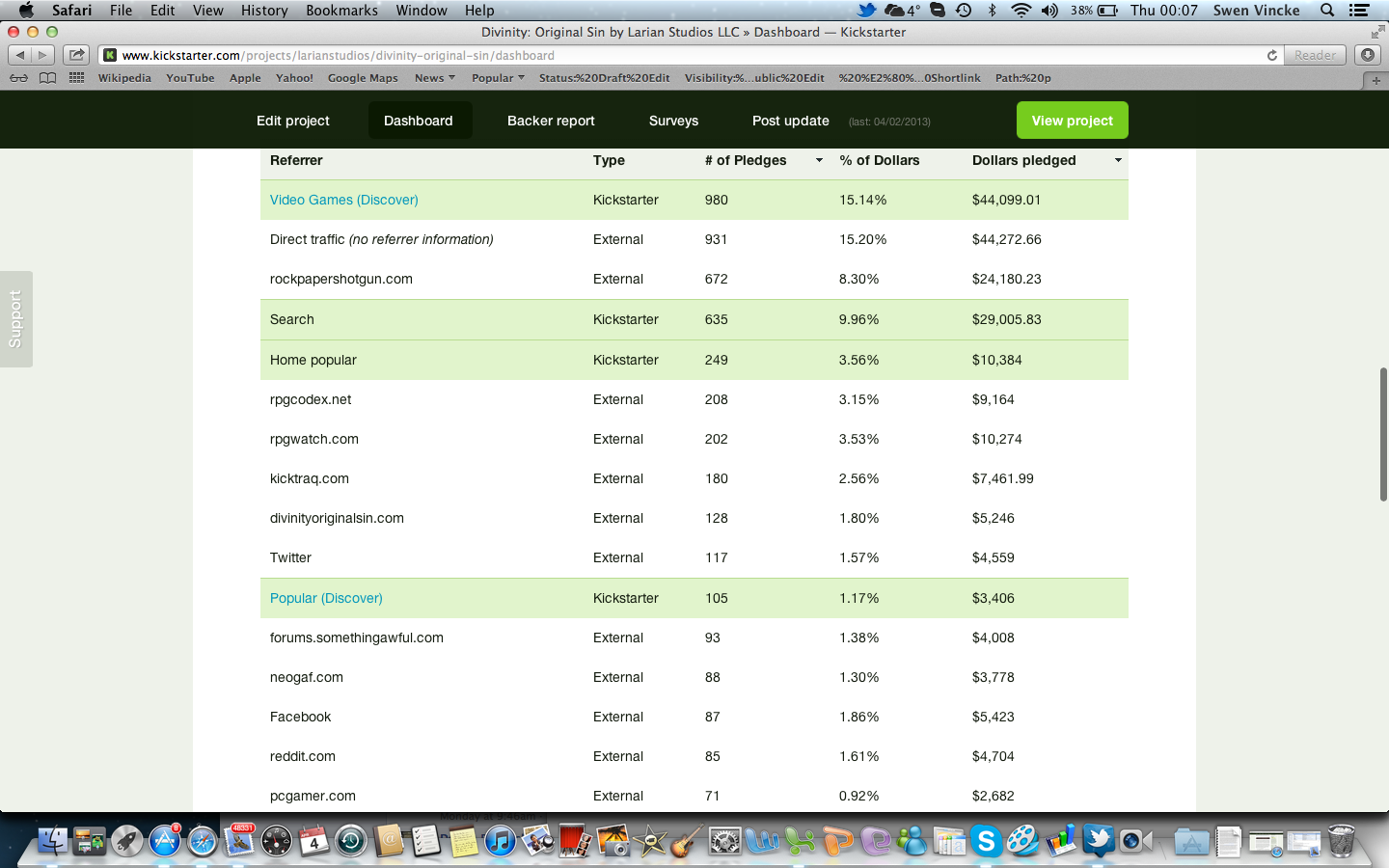 Does anybody see IGN?