Man, time goes fast! It seems like yesterday that I packed my suitcase to go on a press-tour to prep our Divinity: Original Sin Kickstarter campaign. I can’t believe it’s almost over.

This morning David, Divinity: Original Sin’s most excellent producer, told me that the first thing he did when waking up was checking the Kickstarter counter. He followed up with an “of course, that’s not really the first thing…”,  but then saw that I didn’t buy it and sheepishly admitted, “yeah, ok, it’s the first thing I did.”

I frowned at him, giving him my “what kind of life do you have”-look, but then grinned, in an equally sheepish manner and admitted ”yeah, me too…”

For the last three weeks, life has been – “what are they writing, what update is needed, how can we be covered there, can we get this translated, somebody call that guy, how can we get the counter up, can we do this, are we really sure we can do this, ok, let’s do it, what is the Engagor thing telling us, what does the Codex think, what does the Watch think…” and so forth.

I don’t know how we pulled ourselves through, but we did, and I’m mighty proud of the team that did this. The feedback we received from our backers and our fans has been astonishing, and to be frank, a bit scary too. People are expecting so much from what we’re doing that despite all the disclaimers we tried to put out there, we’re almost bound to disappoint. But we’re for sure going to give it our best shot. The support given deserves nothing else but our best.

One thing I didn’t expect when we started this was the long list of personal messages we’d get. There were people telling us how our games affected them, and how the entertainment we offered them, helped them during difficult periods in their lives. A few of these stories were heartbreaking. We were reminded that we’re making games for real people with real people issues, and that our creations can have the same impact as a book or a theatre piece. We were reminded that games are experiences, not jut a bunch of features. The latter is something that’s easily forgotten by developers who deal with overloaded task lists on a daily basis, even if a love for creating experiences is what attracted us to this job in the first place.

Another thing I learnt from the Kickstarter campaign is how to better communicate. You learn a lot from the direct feedback you get from the actions you do in the form of the total pledge amount: Do something well, it goes up. Do something bad, the rate drops. Do something so so, nothing changes. Extremely interesting stuff. It also helped that so many of you wrote us long messages, telling us exactly what we were doing wrong, and what we should do to fix it.

Yet another thing I learnt is that running a prolonged media campaign where your job is to stay in the picture is pretty tough. Thomas, our magnificent video dude, put up a small video digest today and watching it, I realized just exactly how much work was done. I couldn’t help but wonder if we did enough, too little, or too much. I guess I’ll never know, but I do know that there was really a lot of behind-the-scenes maneuvering, trying to get some media-attention.

We had a lot of Kickstarter fatigue to fight against, and this clearly also affected media. One statement I’ll remember from an editor-in-chief was “your previous news piece didn’t generate enough clicks, so I don’t see why we should cover you again”. I was quite angry at that, but the man clearly was just being honest about how his business worked. If it wouldn’t have been for the help we received from our PR agency and our local distributors, I’m not sure we would’ve managed. 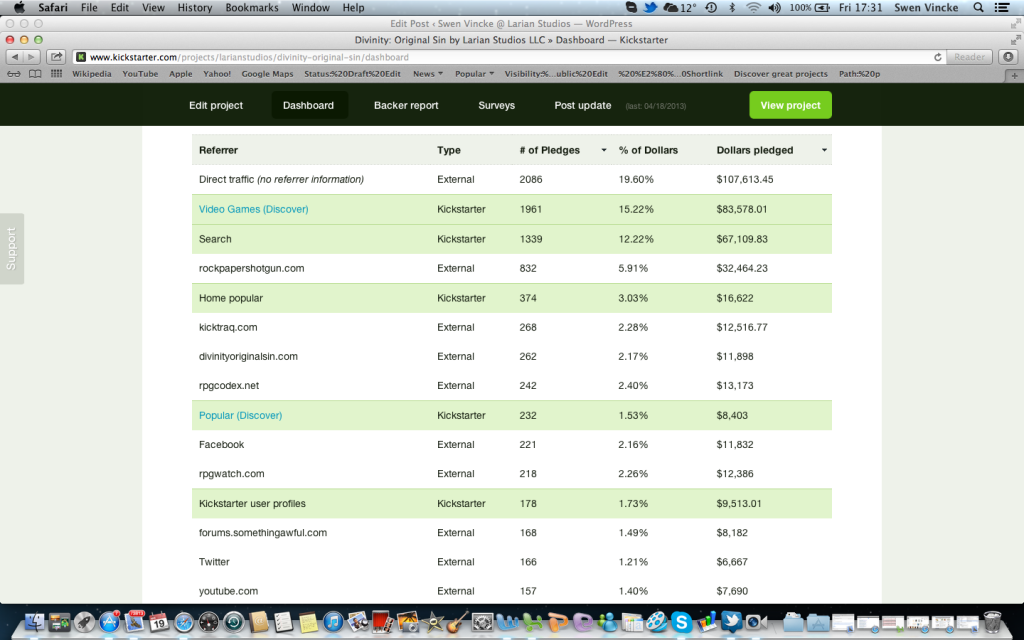 This is how people arrive on our page. This is the top of the referrer list...

People told us that we were stupid for launching when we did. Even if they may have a point, the fact remains that didn’t know when starting to prep PR attention that Torment & Shroud of the Avatar were going to launch when they did. Certainly no journalist who knew about it told us 😉 We could’ve asked of course, but right after those two were over, we had Camelot appear, and who knows what else could’ve appeared had we waited. For all we knew, Baldur’s Gate 3 was about to be announced on Kickstarter once Torment finished. But lesson learnt – if there is a next time, we’ll ask all the guys we can think of if they’re planning on launching something at the same time. A bit of coordination between developers would help a lot. 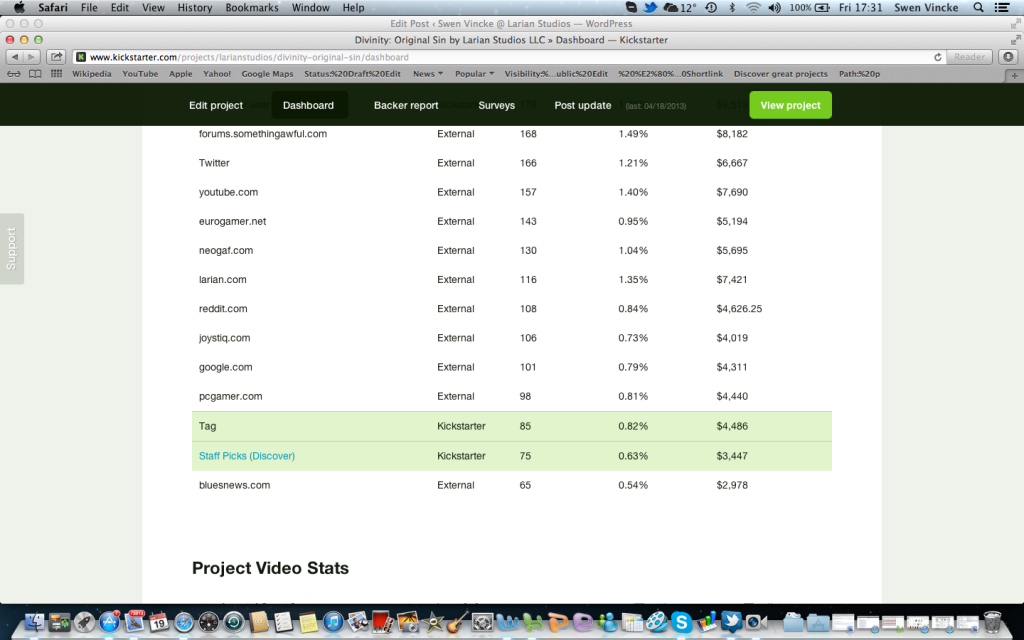 There’s more, but I’m going to end here and keep the rest for a future piece. In one hour I have to play a coop session with somebody from Kotaku. Then we’ll be doing live streams or cooperative play sessions with (top of my head) Gamespot, Kotaku, Angry Joe, TotalBiscuit, Jesse Cox, JeuxVideo.com, PCGames.de, Gmbox.ru, Kanobu.ru and even more guys. Somewhere in between we have to do more updates and organize even more stuff.

All with the aim of making this game as good as we can.

The last time I’ve given so much energy to a game in such a short period of time was when programming Divine Divinity. There we literally slept in the office.

Now, a decade later, with the last week of our campaign coming up, I have the distinct feeling that’s what I’ll be doing again.

Wish us luck – 7 days left to reach 3 big stretch goals I’d really like to be in. Should be doable 😉