Yes, I know. I am long overdue with this entry. But as it turns out, I too seem to be made  of flesh and bones, and I really needed to slow down a bit. You can only manage that long on adrenaline alone and throughout the last months I’ve been living on awake-time that wasn’t supposed to be awake-time. So now, sadly, my body decided to reclaim some sleep-time and grounded me by giving me the mother of all colds! <coughs> Which in a way is good,because it gives me the time to pen down a new blog entry 😉

For those who don’t know the context of that last paragraph:  We did a Kickstarter campaign, for Divinity:Original Sin. The goal was to collect 400KUS$. We walked away with over 1MUS$ pledged,  a lot of public pressure, and tons of new ideas. It was a lot of work, with little sleep for those running the campaign, but it definitely was worth it and I’d do it again, without any hesitation.

I already wrote a bit about lessons learnt from Kickstarter here, so consider this entry the continuation of that piece, even though it’ more of an open question.

One of the things I started wondering about throughout the campaign was who we should show our games to. You see, I used to think that you should strive for maximum exposure, and try to show your game to anybody who can hold a pen or camera. But after having talked to I guess over 200 media over the last couple of months and seeing their output, I’ve actually come to reconsider that statement.

Engagor was gifted to us by a backer. It’s a social media tool that allowed us to track how well our campaign was doing, and it also gave me insights into what media had an impact and which media didn’t. Very cool stuff.

It may sound straightforward, but I’ve come to the conclusion that it makes no sense demonstrating your game to somebody who has no interest in your type of game. At best he’ll get the facts straight, but more than often his writing will be detrimental to your cause. And so the question comes to mind – why do something that won’t do you any good?

Perhaps you think you should put up with it because said non-interested-journalist is from popular-website-X, but really, what interest do you have in having a negative article on a popular website-X? Or an article that has its facts wrong just because you and the reporter speak a different gaming language ?

If somebody doesn’t like a certain style of gameplay, he can’t write a decent preview or review of a game that features that style of gameplay. The best you can hope for is something neutral, but if it’s surrounded by superlatives for all kinds of other games, then by definition the neutral becomes negative.

So imho, in the situation where the previewer or reviewer doesn’t like a certain style of gameplay, he has no business writing about a game in that style, and you shouldn’t ask him to either. You won’t ask your doctor to do an evaluation of the quality of your house’s plumbing, even if there may be similarities in the job description 😉

Or to give another example, you don’t want me to review a FPS. I don’t play them, they’re no fun to me, so all I can do is discredit them by either writing stupidities about them or describing them in such a factual way that you’ll start wondering what is wrong with the game.

Give me a RPG though, and I’ll review it in detail and if you like RPGs too, you’ll know if this is something you might enjoy. Not so if you’d ask me to review a FPS – all you’ll know is that you can change weapons and shoot stuff,  that’s about it 😉

I guess it’s because it’s their job and so they just do it, but that’s really not in the developer’s best interest. It’s also not very nice of the editor who sent them knowing that there’d be a mismatch – he or she should know better, and actually, have the decency of telling you. Of course, certain editors might tell you that you should be happy that they’ll write about you at all, but that’s really not true. There is such a thing as bad publicity.

Because the editor isn’t guaranteed to do it for you, it’s really up to you as a developer to watch out for mismatches.  There’s really nothing to be won when there’s  a mismatch between game and journalist, and the damage to your game may be devastating.  Journalists are herd animals too and one negative article on a popular site can herald a string of negative articles, even if it’s for no good reason.

Observing the results of such mismatchs over these last months (using the Engagor tool) lead me to have my doubts about the sanity of sending out game code to anybody who asks for it. It certainly made me doubt the wisdom of  pushing for previews/reviews on sites that have no natural affinity for our types of games. 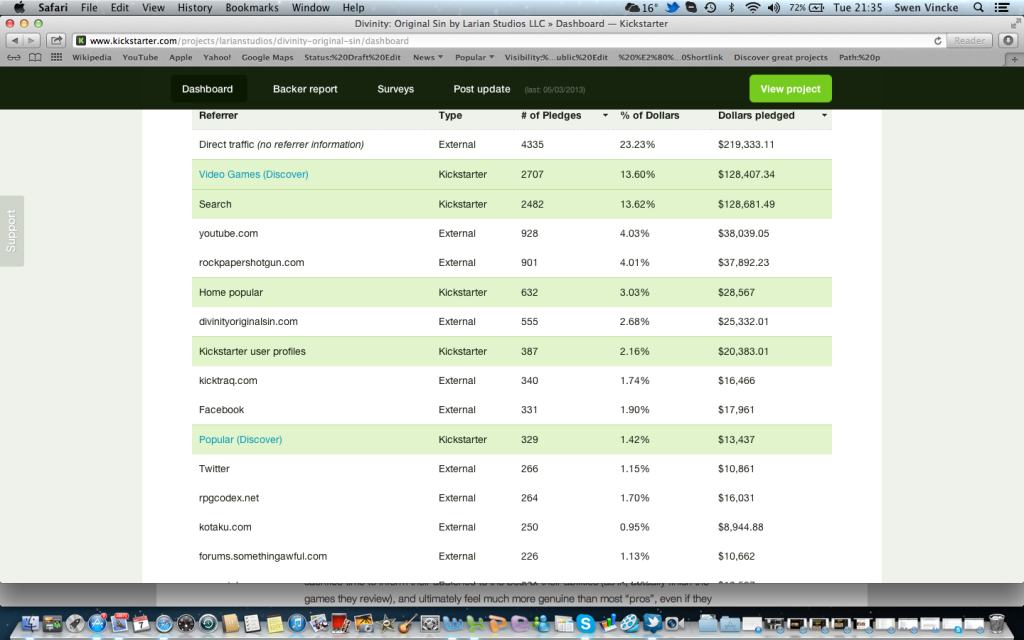 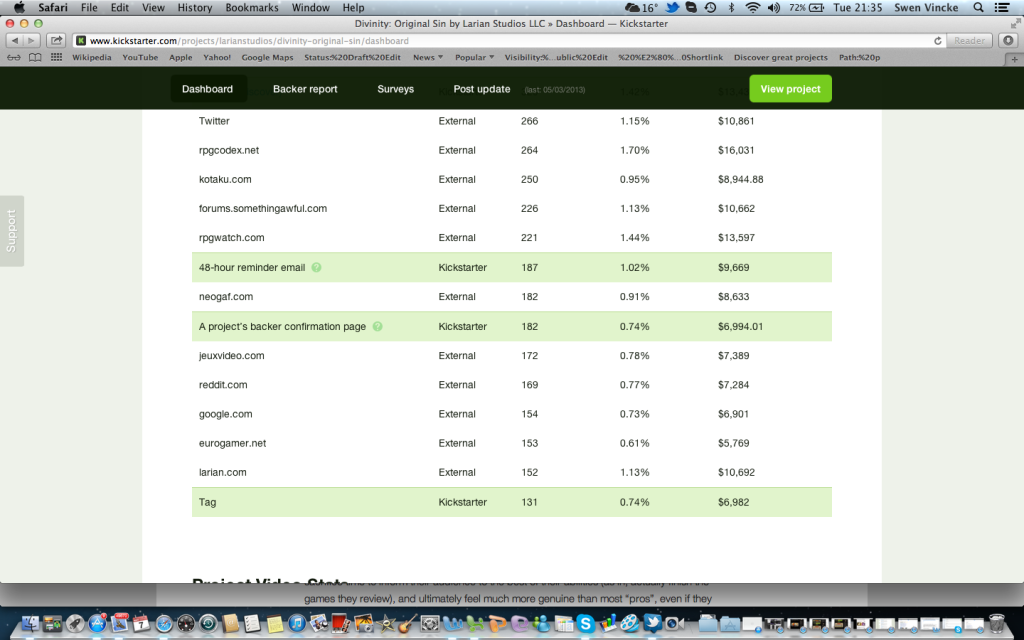 This is where the money came from on Kickstarter. Putting this together with the Engagor data showed us that some sites really aren’t worth it for us, whereas others we didn’t expect do reach part of our audience.

Of course I can’t prevent them from buying the game and reviewing it, but if they do that, I can only assume there’s an actual interest, and then it’s probably ok, though there’s still the next issue to deal with and that’s the editorial quality one.

I’m going to take an example that has nothing to do with my games, but is typical for how imho a lot of former popular publications are responsible for their own decay, and which for I don’t know what reason, really upset me today ( actually, it even got me to write this entry)

Compare this “review” to this one

Spot any differences, other than the medium ?

To my disappointment, reading the first review I learnt almost nothing, not even the name of the reviewer so I’ll refer to him as no-name. I wonder why it was even written. My seven year old does a better job at describing the games he plays, and he certainly isn’t afraid of putting his name under something he writes 😉 I know where these type of mini-reviews come from – they are born in magazine land where you try to maximize the amount of content in a limited number of pages – but really, in an online publication? It has no reason for being.

I wouldn’t have been upset if they’d called it “quick impressions” but giving it the label “review”, that was a bit too much.

Here’s the tweet that made me discover it –  “After a series of delays and a Kickstarter campaign, Star Command arrives on iOS. Our review: bit.ly/YCqn1o”. I clicked on it because I was interested in seeing the difference in opinion between Edge & Angry Joe, who’s review  appeared before. Watching his review had given me a good feeling for what the game is, and whether or not I’ll like it. I actually realized from this one review (the first of his I used to help figure out if I was going to get a game or not) that this man does a better job than a lot of traditional publications I know, so I wanted to compare his work to that of the legendary magazine of which I bought so many issues.

Angry Joe has a bigger audience than most traditional publications and I guess now I know why. Next time I’ll see him tweeting about a review, I’ll click through again. That’s not necessarily going to be the case for the tweets about three paragraph reviews made by no-name.

Anyway, I said to myself – if were Star Command, knowing that my game would be reviewed in such a way by no-name, would I actually send out review codes to no-name? The anwer is: probably not. Review codes really should only be sent out to people who’ll give a game a fair review, you know, of the kind that at the very least describes the game, highlights successes and failures, compares it to the state of the art, and has a subjective appraisal with the author stating his likes and dislikes, very much like what Angry Joe did… not to the 3 paragraphs ones. Yeah yeah, I know it’s idealistic.

Then the little demon inside of me asked – what if you know you made a stinker but are still trying to sell it because you need to earn money to feed your team. Would you actually send out any review codes at al? Well that’s a good question, and one I seriously hope I’ll never have to answer by not making any stinkers. I honestly don’t know what would be the best approach in such a situation, other than trying to fix what’s wrong with the game first.

Anyway, it was observations like the above one that lead me to conclude that we should start screening who we show the game to, and review the quality of their articles, prior to actually demonstrating the game to them. In the past I abstained from doing that, even when I wanted to know, but now I think it’s good practice. We’ve been perhaps too eager for attention past, and happy to show our creative babies to anybody who passed by. That delivered us some good but also quite a lot ofbad results, the most memorable one being PC Gamer UK giving Divine Divinity 56% wheras their US sister magazine gave it 84% and later put it in their top 100 games of all times. The irony 😉

Perhaps there’s another more focussed approach that might yield more benefits. I remain intrigued by the click-through numbers in our Kickstarter campaign and the link between article appearing/pledge counter increasing. It was clear who had what impact, and the results were very counter-intuitive, at least to my traditional view of games media.

To give you an example – There exists no such thing as IGN, the person. There’s only Joe, John and Daisy working at IGN reviewing and previewing games. If there’s a John who like turn-based fantasy RPG’s and played several of them, it makes sense to show him Divinity: Original Sin, if his editor will let him.

But if Joe, John and Daisy think the world ends with Assassin’s Creed and Battlefield, then perhaps we should not send a version to them, because nothing good can come from it.  You wouldn’t offer mushroom-only dishes to a gourmet critique who hates mushrooms and is the editor of “fabulous cooks that don’t use mushrooms monthly” either.

Rather then than waste time on Joe, John and Daisy, we might be better off seeking out the other Gragt’s of this world, people that care about their style of game, are willing to sacrifice time to inform their audience to the best of their abilities (as in, actually finish the games they review), and ultimately feel much more genuine than most “pros”, even if they might be a bit wordy 😉

Sensible or not? I don’t know. Right now I’m mixed on the issue so different insights are more than welcome because you know what?

In a few months I’ll be sending out review codes for Dragon Commander. It’s no stinker, but I’m tending to not send out even beta-code to some of the bigger sites, because I’m afraid there’s a chance they’ll give it to the typical intern (it’s summer) who likes console racing games because big-publisher-strategy-title-whatever will come out at the same time and the “PC-strategy-specialist” will be otherwise occupied.

Let me know your thoughts!