Not so long ago, in fact, just a few weeks ago when I posted my last blog entry, I said that Kickstarter might not be the right route for our future projects. I argued that it’s a limited pool and that it would be wrong for us to fish in it if our games are earning sufficient money for us to invest in our future projects.

I immediately received a few strong reactions, both publicly but also privately about how I got it all wrong, and that in fact I should steer Larian back to Kickstarter. The reasoning is that successful crowdfunding projects send more people to the crowdfunding scene and that benefits the smaller projects. This is referred to as the “halo effect” and one particular bright person compared it to “a restaurant sitting alone or on a block with many others. They all do better with more traffic”.

I have to say that that got me thinking. 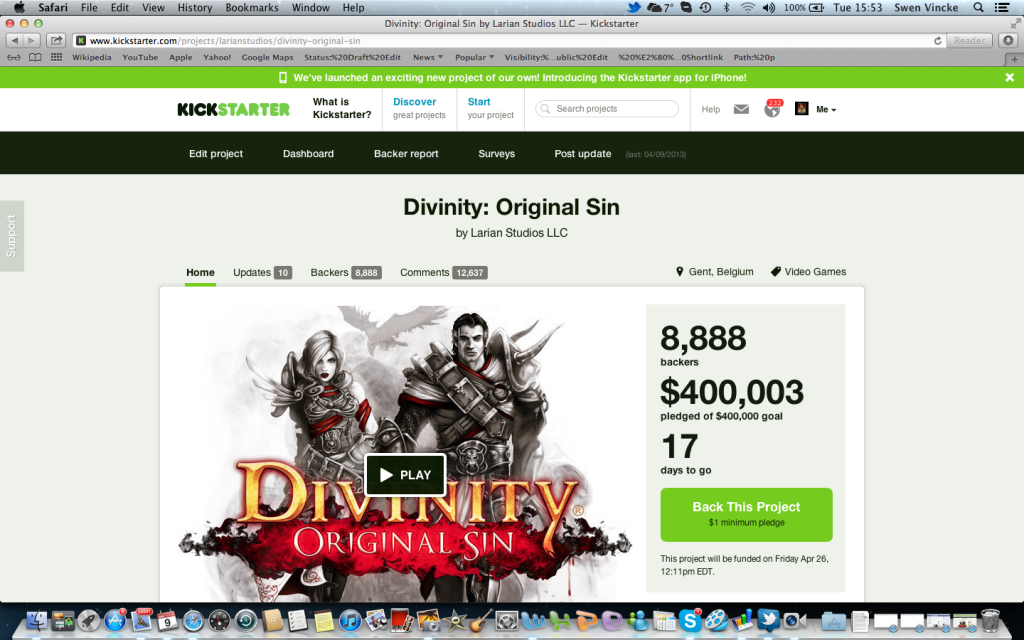 Blasting through our Kickstarter goal was a very important moment in Larian’s history and we’re forever indebted to the people who made it possible.

Just today there’s been a report from a consultancy firm called Ico partners that there’s less money going to fewer game projects on Kickstarter. They project that Kickstarter earnings in 2014 will be half of what they were in 2013, and blame “the lack of low-hanging fruit, a waning enthusiasm – partly driven by some high-profile failures – and the introduction of some serious and well publicized alternatives”, the latter referring to the rise of Steam Early Access.

According to the article quoting the Ico report, half of the money in 2013 was brought in by the big names and the question is raised whether it’s really a case of waning popularity or just a gap in the schedule because all those big names are now busy delivering on their promises. And if the latter is the case, the question remains if this indeed negatively affects the smaller projects because less people are attracted to the crowd funding platforms.

While this is in no way an announcement that we’re preparing a new Kickstarter campaign, I am genuinely wondering if we shouldn’t start reconsidering our position. There’s many advantages to starting a new game via Kickstarter. The main reason that we’re not doing a new campaign is that we don’t want to be seen as abusing the system.

Crowd funding is a wonderful invention and something that has changed the lives of many independent developers. It has rekindled innovation in an over-consolidated market where the traditional powers now have you pay extra to fight the coolest bosses. It should be cherished and protected at all costs and gamers would do well to prefer buying their games via crowd funding lest they find themselves playing games designed by whoever talks best at some marketing meeting.

So, if it indeed is the case that a return to crowd funding by past success stories helps boost the scene then I’m all pro. Only fools and dead men don’t change their minds.