No, I never I expected us to win PC Game of the Year on Gamespot. Not in a million dreams. But I’m damn proud we did. It’s the cherry on top of what has been a fantastic 2014 for Larian Studios and it’s incredibly motivating for all of us to see that all that effort gets rewarded at the end of the day. I was a walking corpse by the end of development but given the amount of support we received, I’d do it again in an instant. 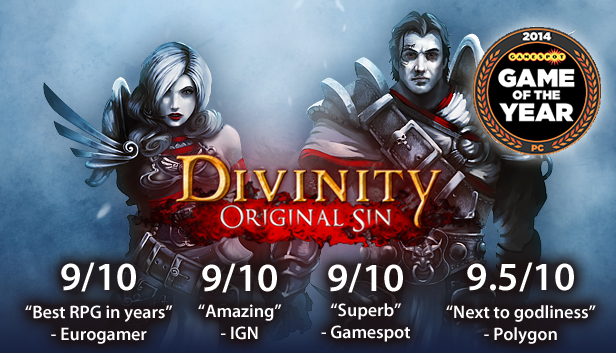 We’re really proud of being able to make this type of banner. It’s incredibly motivating.

And even if we already said it a thousand times, I’ll say it again – we couldn’t have achieved this level of success without the help of all our Kickstarter backers, the people who made suggestions during Steam Early Access and forums like RpgCodex, RpgWatch and of course our own Larian forum. It deserves to be said over and over and any dev not listening to the hivemind yet really should be paying attention.

Since I like contrast, today’s blog entry is going to be about everything that sucked about Divinity:Original Sin 😉

Or rather, it’s going to be about how we hope to do better in the coming years, and what steps we are taking to make it so. In other words, I’ll try to tell you without telling you exactly what our plans are for the next years.

Progress can only be made if you’re aware of your faults and intend to do something about it, so explaining our plans starts with explaining what I think sucked about D:OS and more importantly, why those sucky things made it to the final game.

In one paragraph and unsurprisingly, my biggest issues with the game are the same things most people had issues with. I think the main story can be told a lot better and has more potential than is apparent, that combat falls a bit flat after act 1 and that crafting,inventory & trade UIs could use a bunch of improvements. Certain dialogs should be done better, there’s still a lot of feedback missing from tooltips & skills, and at higher levels character progression isn’t as cool as it should be. Our loot system doesn’t behave as hoped for, and the companions could use some work.

Add  a few hundreds to that and you have my list but, and it’s an important but, despite all  this, I still think it’s a pretty good game. There’s plenty of good stuff  in there that compensates for the bad, even if there’s a lot that can be improved. And there’s another but too. Those criticisms are not aimed at anybody in our team. They are merely the result of the constraints we worked under when making the game.

Anyway, can you guess what is keeping us busy for the moment?

Yep, we’re fixing parts of the story, improving the UIs, revisiting the encounters, rebalancing the loot, rewriting certain dialogs, adding extra feedback, looking at what we can do to fix character progression, improving the companions etc…

Or what did you expect? 😉

But why were those issues there in the first place? In one phrase: We started from scratch(except for a few systems) when making D:OS  and we really had a very small team to do it with. So to avoid having to write another blog entry about what sucks after the release of our next game, we’re now putting a lot of effort and investment in addressing these two issues i.e. We’re increasing our development capacity and we’re ensuring hat we can construct on top of what we’ve already created.

Starting with the development capacity, in about 80% of the cases, bad things in D:OS are related to compromises made because of lack of time. To be honest, they frustrate the hell out of me because I can’t look at them without thinking of what it should’ve been. I hate development compromise but when you have a small team, and iteration is a big part of your development process, inevitably your run out of time and disasters happen when somebody falls sick or makes a mistake. Since you have to make mistakes if you want to be creative and you can’t help falling sick, there’s unfortunately only a few options: You can iterate less(bad idea), you can reduce scope significantly(bad idea for a RPG) or you can increase  team size, with a focus on increasing redundancy and removing bottlenecks from your development process.

Luckily we can now take that last option and so we’ve been increasing headcount. There were 42 of us when we finished D:OS, there’s 53 of us now and the number is set to increase throughout 2015.

One of the cool things we’re doing to boost our team size is setting up a new office in Quebec City. Our purpose  is straightforward: to get access to some of the experience and talent that’s running around there so that our combined craft gets better. I’ll have more to say about that in the near future but suffice it to say that for Larian, this is a very big step. (Should you be interested in working there, jobs@larian.com will be the place to apply and our job pages with open positions will be appearing soon.) 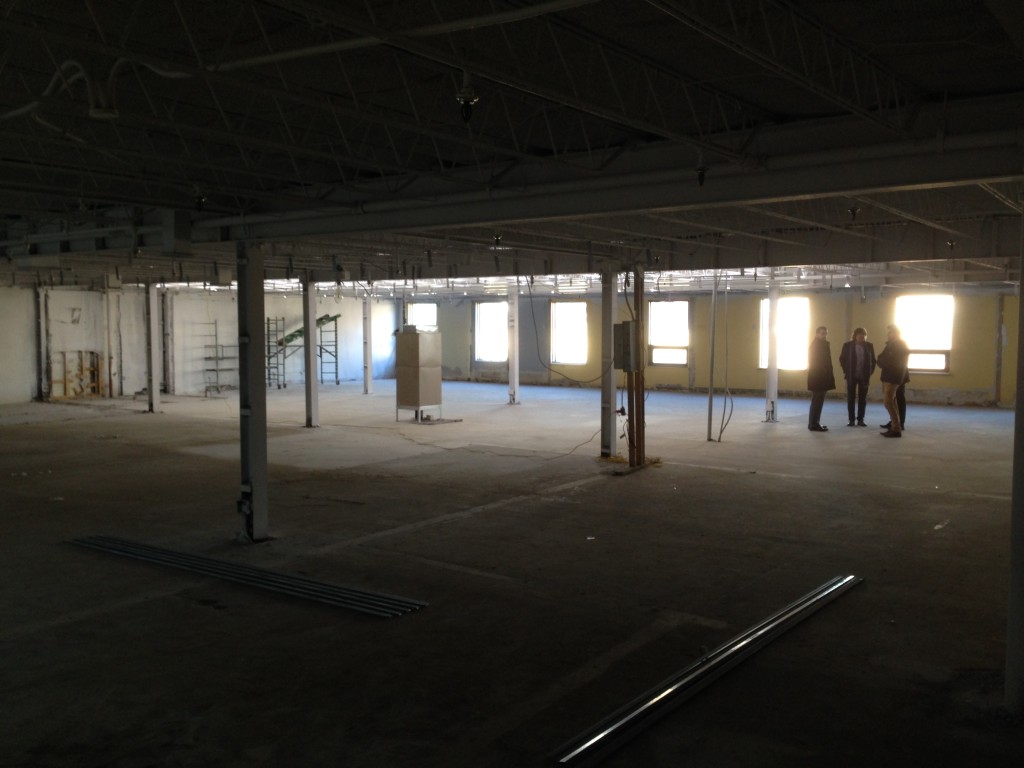 Our Quebec office – doesn’t look like much yet, but wait until we’re finished with it

It’s  a lot of growth for a small independent developer from Gent, Belgium and I’m quite apprehensive  of the dangers that brings. However, the commercial success of D:OS has given us an opportunity to make true some of our bigger RPG ambitions and I’ll be damned if we don’t seize that chance. Going all in paid off in the past so we might as well try again. After all, making big epic RPGs is what this company was made for even if the route there hasn’t always been that straight.

Fixing things is not all we’re doing however, far from it. We’re not hiring all those people just to transform D:OS in a better experience, no, obviously we’re also working on our new RPGs.

Notice the ‘s’. It’s intentional and while I’d love to tell you more about them, I need to refrain for fear of losing whatever press momentum we’ll be able to muster when we’ll announce them. But there’s one I thing I can already tell you, and it fits well with the second big thing we’re doing to improve the quality of our future offerings – both RPGs are being built on top of the D:OS engine.

It’s an important thing, because it means that whatever we fix in D:OS, will automatically be present in our new RPGs. It also means that we can spend most of our resources on developing  new cool stuff without having to reinvent things that worked well already. And it immediately gives us a rationale for putting unreasonable amounts of effort in fixing the things we didn’t do that well in D:OS, meaning our existing players will continue to get improved gameplay for as long as we can maintain compatibility. Furthermore, it also means that the toolset is going to be improved for a long time to come and so eventually we’ll get more and better mods. We’ll even have a Linux version 😉

We call it the secret Larian plan which now obviously isn’t that secret anymore, if ever it was. Our goal is to make new campaigns based on the same core single- and multi-player RPG engine which continuously gets improved, to perfect the rulesets driving it and to increase the amount of stuff you can do in our RPG worlds, all the while making the lore and universe(s) more solid.  That latter (s) btw is something that may or may not materialise, so don’t wonder about it too much right now 😉

There’s tons of stuff we can do in the type of gameworlds we pioneered with D:OS and we intend to show that it was a mistake to abandon this type of gameplay in the beginning of the century, taking full advantage of the effort we already poured into D:OS.

You’re not going to see huge animated movies with barely interactive worlds from us in which millions of dollars go to cutscenes. Instead, you’ll see dense, highly interactive worlds where the amount of possible interactions continuously increases and your freedom to do as you want approaches that of a pen & paper RPG. That too costs a lot, but it yields gameplay which is much more up my alley and thankfully, there are a lot of you who enjoy it. As long as that is the case, we’ll keep on making games like this.

Our ambitions are really very high and I can’t wait to play some of the new things we’ll be trying. Throughout its history, Larian has always tried to do new things in each game we released, and we won’t stop doing that. It goes without saying that we’ll fuck things up from time to time, it is our way, but luckily our players are there to tell us when we do, and we’ll keep on listening. I recently looked at the list of suggestions we received during development, and the amount of those suggestions we implemented. It’s a very impressive list but what’s even more impressive is the list of suggestions we didn’t implement, yet.

And that’s really the gist of it.

To ensure our next games will be better, we’re increasing our team size so we can avoid having to make certain development compromises, and we’re building on top of what we have already to prevent the pitfalls of having to start from scratch again.  Because we want the foundations to be rock solid, we’re spending a lot of effort on improving the first game in what hopefully becomes a series of games that will lead us to the RPG I’ve been dreaming of, you know, the very big RPG that will dwarf them all.

So unleash your furies about what you think we screwed up in D:OS. Tell us, here or on our forums. We’re listening, and we’re continously picking up and implementing your feedback. We’ve made it an integral part of our development process. But also tell us what you’d really like to see in RPGs like this. Don’t forget that we’re making these so you can play them with friends too. It’s part of the vision. Let us know how we can improve that part.

And thank you for everything. In case you didn’t see it yet, here’s a movie Thomas made to show just exactly how important player feedback was for the success of Divinity:Original Sin.