I have to fight to find time to breathe these days.

Things are moving so fast now and we’re doing so many things simultaneously that my previous concerns over our growth scaring the hell out of me can now be considered to be a big understatement. Still, I’m having lots of fun and I’m damn proud of what we’re achieving here at Larian. We finally figured out when we’ll start announcing some of our new stuff (around E3) and if things continue to progress as they are, I think we’ll be showing a lot between then and the end of the year.

I’m just back from lovely Quebec City where we’ve been interviewing candidates to join our new team there and I’m quite excited about the talents that’ll be joining us. Sometimes I feel like I’m in a candy store when the person in front of me turns out to be exceptionally gifted in his or her craft and indicates he or she’s willing to work for us. The complementing of our team with extra capacity & talent together with having a cool RPG engine to build our future work on is empowering us and I’m anxious to see all the little building blocks come together. Obviously, since we’re in the business of making RPGs, I’ll have to exert some patience, but from where I’m sitting it’s already clear that this will become something special.

Because we’ve picked E3 as the period to announce our next big thing, I can’t say too much right now (otherwise we won’t get the press coverage we’re hoping for etc…) so for today’s long overdue entry, I figured I might tell you a bit about something that’s been bothering me. 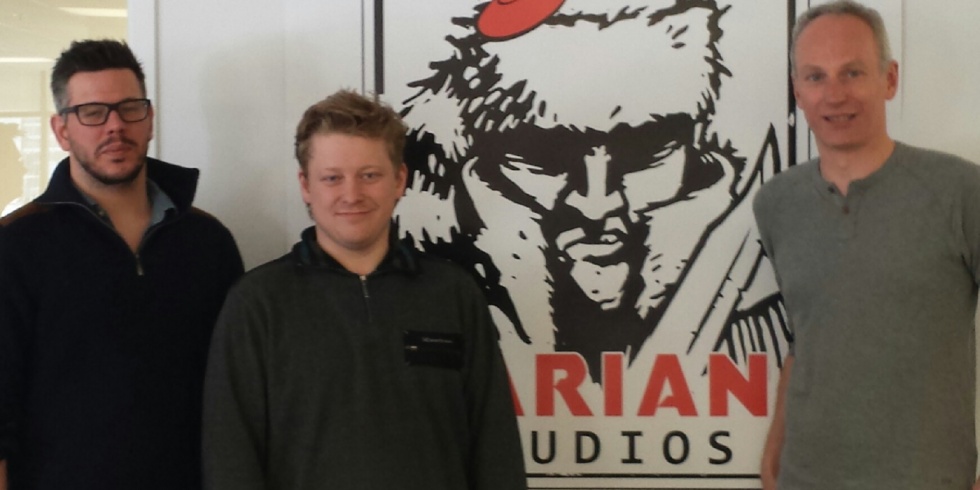 Three stooges posing for the opening of the Larian Quebec office

By nature, I prefer sitting in my cave focussing on my game and if I come outside of said cave, it’s because I want to connect with players to discuss my game. After that, I want to return to my cave and make my next game. Anything that interferes with that process I consider disturbing. I reluctantly learnt to live with having to channel energy in the sales process as that allows me to make the games I want to make independently, but that doesn’t mean I like it.

I recently spoke at GDC and was also honoured to receive an award for cultural entrepreneurship that received a lot of attention here in Flanders. The net result of those two things was  a bombardment of requests for speaking at events, giving my opinion on matters and opportunities to meet up with people. I didn’t do the calculation but I think that if I’d say yes to everything, I’d probably be busy for at least a few years, just following up.

I already felt awkward in the past for being so aggressive in my triage of mails, but now it’s literally becoming ridiculous. I gave up answering but like most people (I think), now feel bad about it because I in general do try to be nice & polite. But it’s just become impossible. I’ll probably be perceived as an arrogant prick, but I’ll have to live with it because I can’t see any other workable solution other than just not answer all these people, or take a personal assistant just to answer my mails (which I think doesn’t make sense for a game developer).

So if you’re one of those people who’s waiting for an answer from me, please consider this as my apology for not replying to your email sooner because I’m just a regular human being who needs to sleep from time to time too and who also wants to actual make games instead of talk about making them.

Speaking of which, I did a lot of talking about that last game of ours at GDC. I just received  my session evaluation from the GDC board and apparently it was perceived better than I expected myself (they ranked me 22/133). It’s interesting how by telling me my ranking they managed to motivate me to do better next time. At the same time, it’s rather irrelevant as the real number I need to improve is player’s appreciation of our next game.

Which brings me to the crux of my problem. I “lost” at least two days prepping and doing this GDC talk, meaning that those two days weren’t spent on development. This loss of time was something that occupied my mind as I was making my powerpoint and rehearsing and I really needed to convince myself that giving the GDC talk was a good thing. (In the past I have been known to walk out of a GDC Europe presentation because I needed my time)

You see, the other thing I was working on at the same time was the main beats for our next RPG and in my mind they dwarfed the GDC talk in importance. I have the same problem with updating this blog. Every time I want to start on it, I think of something I should be doing on the game, and so that takes priority. I can’t but help that that’s the better thing to do, but experience obviously taught me that if you don’t do the other part, then your company is doomed.

I guess that in the type of job I do, this tension between selling my company to the public and developing is inevitable, but I keep on struggling with finding the right balance. Right now, the way I fix it is by working harder, but eventually I wil run out of stamina, and so I need to find a better more permanent solution. I’m quite curious how other people in similar situations handle this. My current solution really is to work harder and to focus on the 10% of things that make up 90% of what’s important for Larian, but I can’t help feeling stressed about the other 90% of things I’m not doing.

So is it ok to not reply to people’s mails? Is it ok to refuse things you should feel honoured about because you need time to work on ‘your thing’? Is it ok to be incredibly annoyed when someone sends you a reminder? Can you tell them ? How do people perceive you when you flatly don’t answer them? Do people really understand that you’re too busy? It’s something that preoccupies me these days and I don’t know the right answer. All feedback more than welcome because I’d really like to know the best approach.