Dolores & Daniel got married the other day. They are one of the couples that used Divinity:Original Sin as a marriage proposal tool and represent one of my favorite examples of why I love my job so much. Their thank-you-mail complemented with wedding pictures arrived just as we were preparing the announcement of Divinity:Original Sin – Enhanced Edition for Xbox One/PS4/PC/Mac/Linux/SteamOS and was eagerly shared in the office – it really is the type of stuff that makes developers tick. 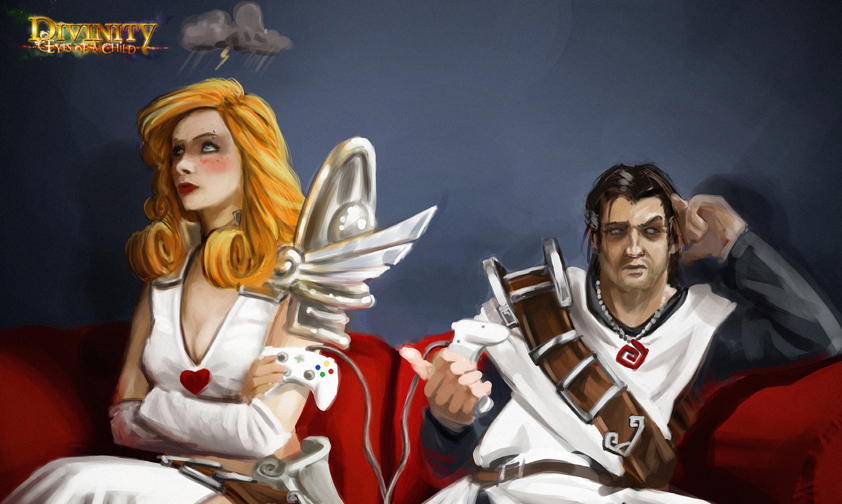 Their mail brought to mind an image we used to pitch Divinity:Original Sin to console publishers, back in 2011. It features our two main heroes sitting on a couch, playing Divinity:Original Sin together with a controller in local coop. For some reason, the vision wasn’t strong enough to convince the publisher acquisition guys back then, even if I told them I thought this was the best thing to happen to console gaming ever. Maybe they would’ve changed their minds if we’d put in a picture of Dolores & Daniel.

Picturing them playing together fitted very well with my belief that a turn-based RPG with split-screen local co-op & good controller support will do very well, so I welcomed their mail as a good omen. I needed one because there’s no real precedent for what we’re trying to do on console and in an industry that often cites things like – “If it hasn’t been done before, maybe there’s a good reason for it” – it shouldn’t be surprising that I am slightly stressed about whether or not there’s actual a target audience for what we just announced.

But it seems so obvious to me and I always wondered why nobody ever came up with the idea of doing a turn-based RPG with split-screen support and pen & paper like freedom on console before.

I grew up playing games on the Commodore 64 & later the Amiga, and some of my fondest gaming memories consist of me playing coop games together with my friends. Once I discovered RPGs, I really regretted not being able to play them the way I played say … Spy vs Spy or Kick-off even. Yeah, I know. I’m old. But it goes to show – ever since videogames were invented, nobody did a turn-based split-screen RPG on console. At the very least they could’ve tried doing a split-screen version of Adventure on the Atari – that would’ve set the tone:) 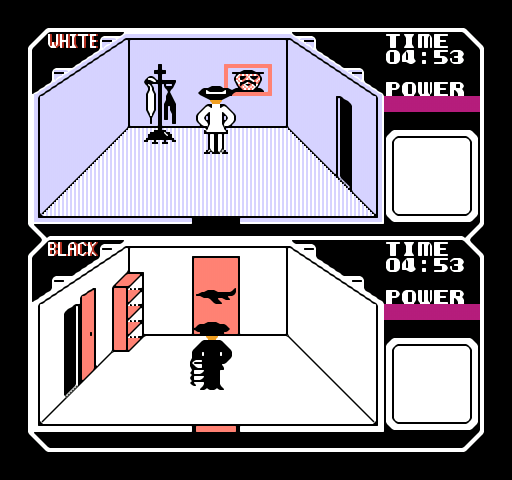 Spy vs. Spy was one of the games that pioneered split-screen

In any case, for obvious reason I hope we didn’t make the wrong call on this one.

A shitload was invested in our Enhanced Edition and a lot of people have been working on it for a long time. Other than the small but not unimportant detail that it’s coming to PS4 and Xbox One, our Enhanced Edition features reworked dialogs all voiced by AAA actors, a story & world that has been drastically improved with hours of new content, not only during the game but also at the ending (that part that gets played by 5% of players), a truckload of new features & improvements and game modes that play incredibly different to the normal mode because we replaced pretty much every encounter.

Given how much we put in there, I suspect that what we call an Enhanced Edition goes a lot further than what others call an Enhanced Edition. Chances are of course that all those changes don’t make much economic sense but then again, maybe they will. We’ll find out soon enough and for what it’s worth, I’m quite happy about having been able to make all these changes so that we could craft what’s essentially a new and more complete experience.

I do mean that. 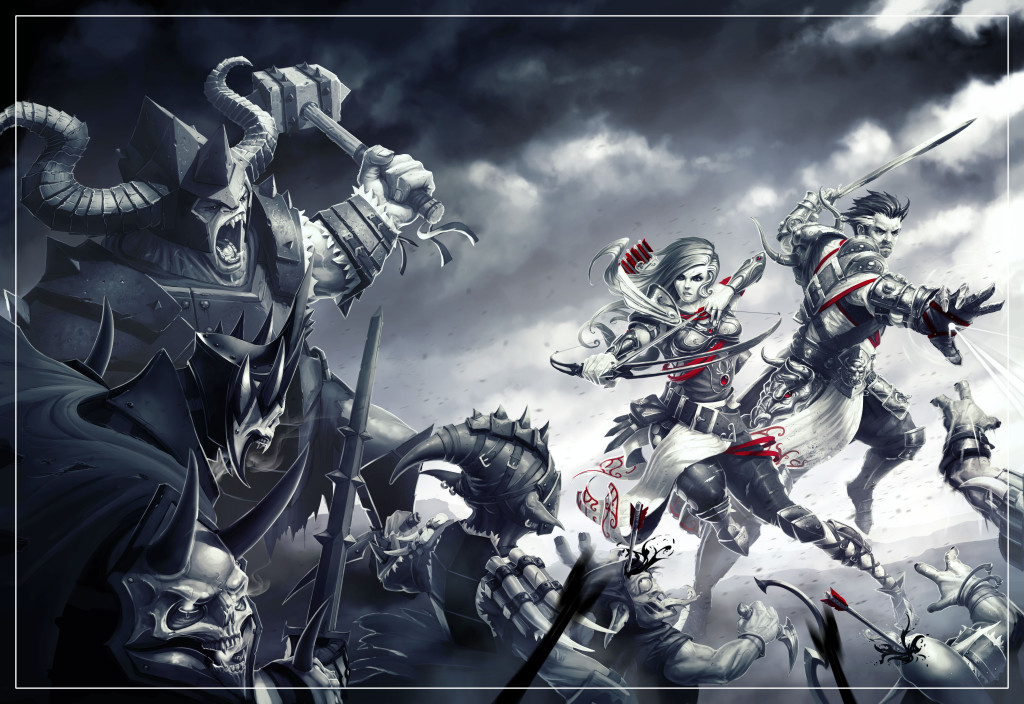 Playing D:OS Enhanced Edition is more fun than playing D:OS and I’m quite proud of what we’ve accomplished. I was doing a review meeting the other day of the entire new ending we added to the game & it felt … complete. It really is quite remarkable.

Another thing I’m happy about is finally being able to talk about the bloody thing.

For months I’ve been wanting to talk about it, but I couldn’t because we were in the publisher pitching process. Publisher you say? Haven’t you been promoting independence all along? I have, and I do, but you need to pick your battles and this particular one is too big for us on our own, so we needed help.

A console release like the one we’re planning on has a big retail component (I’m told between 60% & 70% of sales are still being done in retail, probably less by the time we release) and that’s just the type of thing that’s inaccessible to a developer like us. The cost of goods on console can run up to something like 8 euros per unit meaning that if you want to sell say a million units, you’ll have to put in 8 million euros. And that’s just in cost of goods, you haven’t talked about the marketing yet that’s mandatory to make any kind of splash. Not only does it take quite some budget, you also need to have the staff to support it.

So how did we end up picking Focus and not one of the bigger boys who were in the running for this? 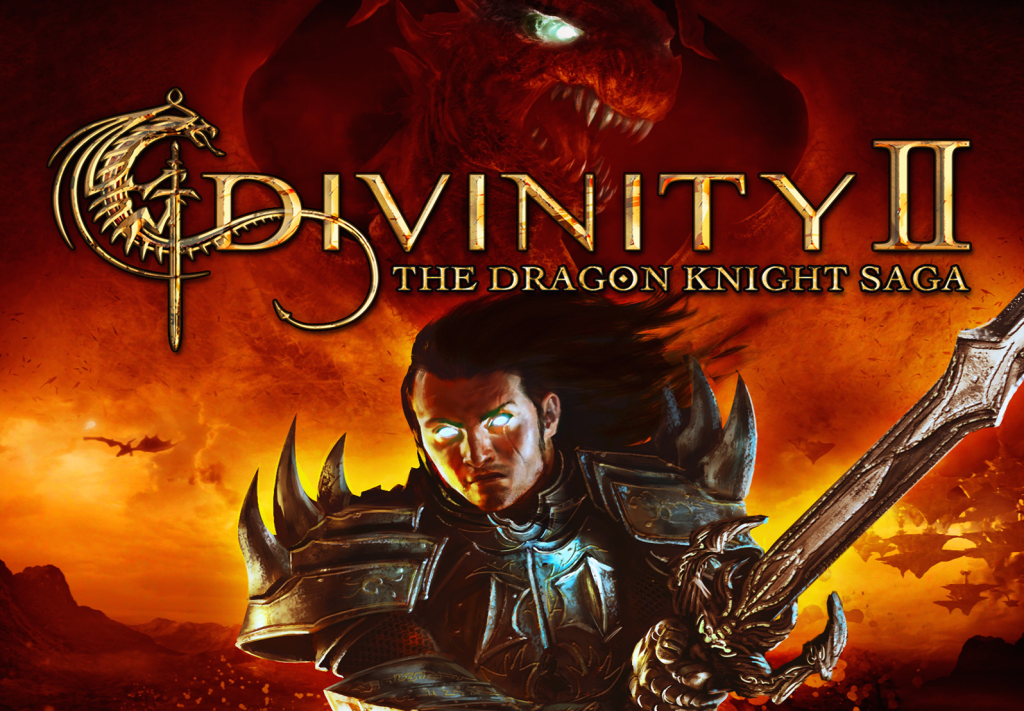 Focus helped us with Divinity 2: The Dragon Knight Saga

For starters, they know us & Divinity well and were the ones that gave us the break we needed back in 2010 when we transformed Divinity 2:Ego Draconis into Divinity 2: The Dragon Knight Saga, the game that essentially forged the path to our independence. That wouldn’t have been possible without their support and it’s something for which I’ll remain grateful to them. They also always were very correct in their dealings with us, a rare thing in an industry that’s full of sharks.

I was discussing the Enhanced Edition for Xbox One & PS4 with some of the aforementioned bigger boys when a chance meeting at GDC 2015 resulted in me visiting the Focus offices in Paris. There I was met with great enthousiasm and given an overview of everything they’d been doing in the last year, and more importantly, what their ambitions were. It also became very apparent that a lot of the boys & girls in the Focus team were big fans of D:OS and would put their heart and souls into it if they got the deal.

This was followed up within the day with an offer that was in line with what the bigger boys offered, all without anybody at Focus even checking if the game ran on console.

It was a major sign of trust & respect, and it didn’t miss its mark. I didn’t even bother negotiating with the other parties anymore as I wasn’t interested in scraping the last penny out of the barrel. Rather my interest lied in partnering up with somebody who could complement us in all the areas where we had no expertise because it was clear this was something we couldn’t do ourselves.

And here was a partner that I could trust, that believed in us and that loved our game. What more do you want in a publisher?

Luckily for them, the game also happens to run well on console;)

But I deviate. This piece is titled “The why of our third secret project” with good reason. When we shipped D:OS my initial feeling was – that’s it, I never want to see D:OS again after having risked pretty much everything for it and having woken up with the monster it is for years. But then the feedback came in together with criticism I thought was correct, and I started wondering what it’d take to fix it. And I wasn’t alone. Most in our team had the same feeling and wanted to improve things further.

And so we started, first with small things intended to be included in the N-th patch, but soon with more drastic things that couldn’t be included that easily. Then, even more drastic things made it to our tasklist that conflicted with the “patch protocol”, a series of rules that ensure story changes don’t break savegame compatibility and would therefore only be present in new games.

When the UI, controller and split-screen experiments looked like they were going to be succesful, it almost became a no-brainer that we’d apply our re-engineering skills to the entire game. And so we did.

One of our biggest issues was that we suddenly had two games to maintain on PC. One was singlethreaded, the other multithreaded. One was based on DirectX 11, the other on DirectX 9. One had limited camera rotation allowing for certain pieces of level design to be incomplete, the other a 360 degree camera. One was live, the other wasn’t etc…

It quickly became impossible to do things on both games simultanously as the changes become bigger and bigger, and so at some point we had to make a choice. We decided to do only the really necessary things on D:OS and focus all of our creative energy on the Enhanced Edition.

This had big implications for certain things that were in the pipeline like for instance the Linux version. Our decision essentially meant we could start over again and that obviously got some in the Linux community quite angry at us, but we reasoned that over the long term, it ‘s better the Enhanced Edition has Linux support instead of the original D:OS. It improves the chances of our future games having Linux support too, though I don’t want to commit to that just yet.

In case you’re wondering about the latter, yes, we are going to give everybody who owns D:OS on PC (and on Mac if you bought it through Steam or Gog. And if we ever figure out a way of having a real communication line with the people running the App Store, then there too) an Enhanced Edition for free. It’s another way of saying thank you. That means that if you own D:OS now, you’ll soon see an extra entry in your Steam or GOG library for the Enhanced Edition. You’ll still be able to play the original D:OS too.

Finally, the last big reason I didn’t mention yet about the why of the Enhanced Edition is the strategic one.

We’re putting a lot of effort in getting the Enhanced Edition to run really well on Xbox One & PS4 with controller support, with multiplayer and with split-screen support because from now on those features will be basic features of our engine.

That means that if we decide to go multi-platform in the future, we’ll be able to. This without–dumbing down- or –simplifying- things because a lot of the hard work will already have been done. It makes us a lot stronger as a company and will allow us to do much bigger things in the future. I’m quite excited by that prospect.

So, there you have it. In addition to having two big RPGs in production, we decided we needed some occupation therapy and added a third project to our roster. It’s a big thing for us, the step to consoles, and I think we’ll do a lot better this time around than last time we tried.

It remains complex business, though bringing 80+ hours of complex content to different platforms, both on the engineering and on the business side. But it’s another step of growth for us and another step in the direction of that very big RPG that will dwarf them all. That’s certainly worth all the stress 😉

So what do you think? Good move or bad move? And do we stand a chance on console?